Hundreds of people protested in Sheffield on 22nd July 2006 against the ongoing Israeli war on Lebanon and Palestine. The demonstration was called at short notice by the Sheffield Stop the War Coalition, Sheffield Palestine Solidarity Campaign and The Sheffield Muslim Association of Britain with the slogans, "Hands off Lebanon - Freedom for Palestine - Don't attack Syria - Don't attack Iran".

Despite very heavy rain there was an energetic, impromptu, march around the city centre which took the one policeman on duty by suprise. The route taken was down Pinstone Street towards the Moor, up to Fitzalan Square, up Carver Street, across Division Street and onto West Street. The protestors then marched down the tram tracks to Fargate — a route that would never have been agreed by the police in advance — and back to the Town Hall. It was all over by 1pm.

The protest was part of an International Day of Action in which tens of thousands of people throughout the world took to the streets to protest. In London, up to 30,000 marched from Whitehall, through central London, to Hyde Park, where they held a rally [ 1 | 2 | 3 | 4 | Another Wasted Opportunity]. Similar, but smaller, demonstrations took place in other cities up and down the country, including Manchester, York, Newcastle, Edinburgh and Glasgow. 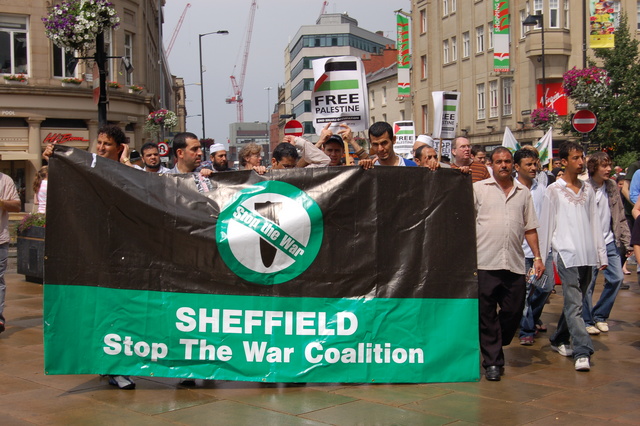 For the past twelve days and nights, Israeli air forces have destroyed countless civilian buildings and means of transportation in operations that have killed more 400 people, mostly civilians, and wreaked havoc on Lebanese cities, harbours, airports and other infrastructure, leading to the displacement of more than half a million people.

In Chicago (USA), some 3,000 people from the Muslim, Arab and progressive communities took part in one of the city's largest protests against Israeli aggression since the beginning of the Second Intifada.

In Australia, thousands of people turned out at rallies in Sydney, Melbourne and Adelaide, while a gathering in Perth was cancelled by the police.

Many European cities also saw some big protests: Paris, Amsterdam, Bremen, Warsaw and others. Some 10,000 people had demonstrated in Madrid on 20th July, and so had people in Rome, Athens, Stockholm and Canada [report].