23 September, Manchester: CND and the Stop the War Coalition are holding a national “No Trident Replacement, Don’t Attack Iran” demonstration on the eve of the Labour Party conference. Please join us to say NO to another war of aggression in the Middle East. 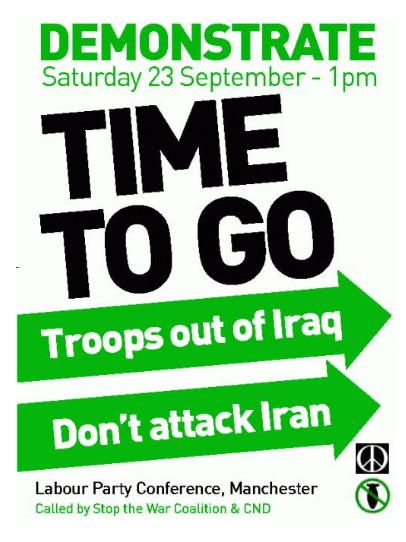 This is the first national demonstration to include a specific anti-nuclear message for many years! Please join us in Manchester to show the Labour Party our opposition to a new generation of nuclear weapons.

CND strongly opposes any plans to attack Iran and reacts with alarm to suggestions in the press that the US may be planning to use tactical nuclear weapons against Iranian facilities. There is currently no evidence to support US allegations about the Iranian nuclear programme. CND calls on the international community to prevent an attack taking place and urges CND's members and supporters to convey their opposition to an attack to the Prime Minister.

More info on the Stop the War web site:


For details of transport from Nottingham to the National Demonstration in Manchester on Saturday, 23 September, ring Mark on 07947 609 401.

Coach transport is being organised from Tower Hamlets in East London.

Coaches will leave Tower Hamlets at 7am, and return from Manchester at 5pm. Donations to help the low paid and unwaged join the transport are urgently needed.

thstopthewar@yahoo.co.uk to get hold of tickets.

Coaches are going to manchester from all over the UK. Also a train has been chartered from London. For the more energetic, there are also cycling and walking options.
All can be found at