American 'Independence Day' at Menwith Hill used to be a grand affair - being a key date in the American calendar. One year the 'Red Arrows' came and there was always a big firework display on 4 July. This year the Americans at Menwith Hill held 'Independence Day' on the Saturday before 4 July - a bit like saying that a key religious festival eg Christmas Day is being moved to another day perhaps (maybe because we were there again calling for Independence FROM America?) 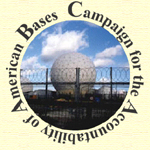 Campaign for the Accountability of American Bases

About 80 -100 people came from different parts of the country. It was a glorious summer's day. There was a big police presence. Outside the base there were Home office police from local forces, 4 police horses, police on bikes and a 'control' centre down the road. Inside the base the Ministry of Defence Police Agency had enlisted the help of the Operational Support Group, the Divisional Support Group from York, MDPA officers on quad bikes and yet more officers from different bases. It seemed somewhat over the top. The police were however very pleasant and courteous and also supplied water for anyone.

Steve Hill (Daftasadrum) got it all going with a drumming circle. Mike Davies (Alliance for Green Socilism) was the 'Master of Ceremonies' for the demonstration. He spoke about the role of the base, the increasing introduction of more draconian laws and how American foreign policy has made the world a far more dangerous place.

A tradition has grown up at these demonstrations now when we turn our backs on the base and face away to look out to stunning Nidderdale. It looked wonderful. For two minutes we were invited to be silent and remember all the people who have died in the Iraq and Afghanistan conflicts.

We read the Declaration of Independence FROM America - a carefully crafted amended version in the spirit of the wording and sentiments of the original and brought up to date to reflect what is happening today - refer to CAAB website for full text.

We were privaleged to welcome Tom Neilson with his son Jacob who came especially over from the States for this demonstration. He is a political folk singer with a fine voice and a long history of protest. It was a treat indeed (

We walked round the base, stopping at various gates for information about the base and specifically about the role of Menwith Hill (and Fylingdales) in the American Missile Defense System from Lindis Percy (Joint Co-ordinator of CAAB) and Dave Webb (Convenor of Yorkshire CND). A refrigerated van with supplies of water came too.

Rosalind Armitage from Manchester was arrested for sitting in a field within the 'restricted' area of the base. She was arrested under the Military Land byelaws (unusually) and released after a 'caution'.

The demonstration finished at 5 ish. At 6 pm the regular Tuesday evening demonstration started and went on until 8 pm! This happens every week. The whole world are very welcome! Next Barbeque will be on Tuesday 18 July 6-8pm - please bring contributions.

Thank you so much to everyone who contributed to the day -special thanks to Tom and Jacob Neilson.

See you on Saturday 7 October 2006 - part of the international call for protest 'Keep Space for Peace' week called for by the Global Network Against Nuclear Weapons and Power in Space - please come!

Details will be on the CAAB website nearer the time:

"Never doubt that a small group of thoughtful, committed citizens can change the world: indeed it's the only thing that ever does." Margaret Mead