It is hard to believe but it is nearly twelve months since the old Yorkshire Arts Space on Matilda Street sprung into life as a convergence space for activists opposing the G8 Ministers meeting in Sheffield. Within days a makeshift kitchen had been set up, sleeping space sorted, workshop space organised and a media centre built and banners flew defiantly from the building. As the actions sprung up across the city, the Matilda Street convergence centre buzzed into the nights with people painting banners, planning, sharing information and skills, checking indymedia reports and uploading stories and photos. While one eye was firmly on the exhausting days of the protest against the G8, already one eye was on what the future could hold for this building. 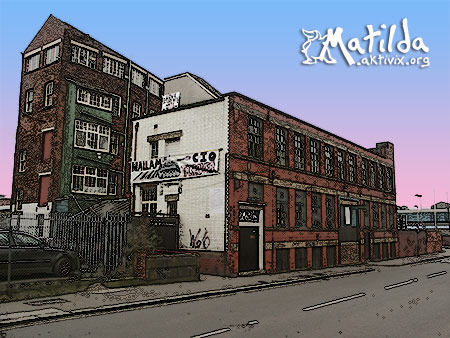 As soon as people returned from the G8 protests in Scotland attention focused on turning the old Arts Space into the Matilda Social Centre, reclaiming precious space in the city for the community against a backdrop of rapid and rampant re-development. Over the summer, meetings were held, wide ranges of views and ideas fiercely debated and slowly the space started to develop. The hacklab was the first space to be developed in the July, building on the media centre that had been established for the G8 protests. The building hosted the Lost Film Festival, a zine reading night and the gig space collective formed and started work scraping mould of the dank basement walls to create performance spaces. The No Borders campaign fund raising night further kick things off nicely at the beginning of September. Other events followed - film nights, Dissent gathering, No Borders magical mystery tour action [2] and campaign meetings. By Autumn the cafe collective had installed a catering kitchen, the art studios were up and running and the art collective organised the Urban Invasion art exhibition, and the gig collective was hosting regular gigs in the basements. November saw the second 3-day Sheffield Indymedia film festival taking place in the building.

Despite the lack of heating events continued to happen at Matilda over the winter with more gigs and film nights, a gathering to plan for the Saving Iceland campaign this summer, and bike maintenance workshops. Maintenance work on the building also continued. Spring brought the opening of the M...Gallery after weeks of scraping paint from the walls and windows, and a roster of planned exhibitions, an Action Medics training day was held and a women's day of workshops and cabaret. This May is crammed with gigs, films, an acoustic night, a permaculture slide show and a Linux workshop as well as the usual meetings, hacklab nights and Thursday social. June saw a Ryte Posh Dinner to raise funds for Saving Iceland (photos) and in July the Indymedia Summer of Truth film screeings are taking place.

The former Yorkshire Arts Space building was sold (many say illegally) to Hallam University in 1998 under the condition that the University was to move its Psalter Lane Art College to the site. This never happened, and the building stood virtually empty for years. Last year it was sold on to Yorkshire Forward (one of the Government's nine Regional Development Agencies established in 1999) at a suspected vast profit to the university. Yorkshire Forward's interest in the building has increased over recent months, but the plans they may have for the building and the surrounding area remains unclear.

Reclaimed or squatted spaces like Matilda will always be precarious - you never know how long they will last, but so far it has defied all expectations as it reaches its first anniversary.

This Building (Matilda) was illegally sold to Hallam University

It was not put out to tender by the council at the time of the sale.

The council's only reasoning for selling to Hallam was their apparent
bigger agenda. This agenda was to move Psalter Lane art college to this
site, this was one of the conditions of the sale.

Not only have they not adhered to this, Hallam have broken contractual
agreements by selling the building and the large plot of land for an
enormous profit to Yorkshire Forward (remember the NCPM, "National Centre
for Popular Music",

http://en.wikipedia.org/wiki/National_Centre_for_Popular_Music this was bought from the very same people, Hallam
paid £1.4 million for it, its cost to build was £20M. There is
cross-fertilisation on these boards of directors).

Adrenalin Studios made a higher offer and were completely ignored,
Adrenalin have rented this building for years and spent an enormous
amount of money on it.

Hallam should not be allowed to capitalise on such activity, damage
businesses, abuse tax payers money and ignore the needs of the CIQ
(Cultural Indisties Quarter).

Hallam's capitalist activity is damaging businesses in the CIQ!

Adrenalin Studios want to see this building used for creative purposes
not for corporate profit.