Protection of the National Health Service, in Huddersfield and nationally. Opposal to closures, privatisation, redundancies.
Oodles of people marched in Huddersfield on Saturday 11th December, so many I couldn't see the end of the column, and everyone cheered us on.
If you ask around in Huddersfield, everyone in the town seems opposed to the NHS bosses' plans to close St. Luke's Hospital (mainly mental health and elderly care), and departments at Huddersfield Royal Infirmary [HRI], including crisis maternity services, gynaecology, the children's ward, the breast clinic funded by local campaigns, planned surgery...

On Saturday public disapproval was tested, and it was no surprise to me that a huge number of people turned out at HRI on Saturday morning to protest against the cuts in health provision.

Dr. Jackie, an organiser in the campaign to save the NHS, had hoped for a thousand people, and I think maybe there may even have been a few more. The slogans showed an awareness that health service 'reforms' are money motivated, and some of the less catchy and more outlandish suggested that axing services was a form of terrorism, and that MRSA has been spread by dirty privatisation.

Lots of spectators voiced their approval too, and in the Piazza, where the march drew back together again. The speeches drew approval from many who were just passing by chance, and it was decided that we would aim for 40,000 names on the petition, which is 25% of the electorate. We currently have 16,000 and are calling on the council to hold a referendum. 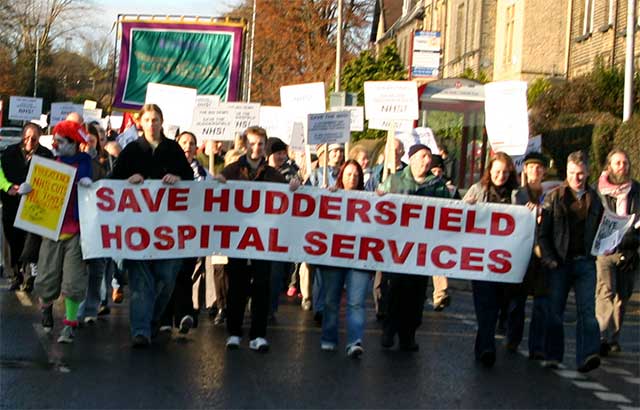 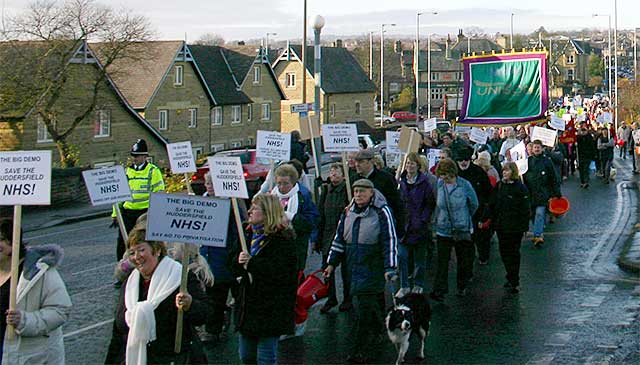 I have Been sent these Photos from someone on the march.