Buses for people not profit

300 people demonstrated in Sheffield on 19th November 2005 against bus fare rises and cuts in services [callout | reports and photos]. Fares on First buses in Sheffield have gone up four times in the last year and since the privatisation of the bus service journeys made in South Yorkshire have fallen from 350 million a year to 112 million last year and there has been a corresponding increase in car usage, congestion and pollution.

In addition to the demonstration a group of activists put on a free bus service — "Some people believe in asking large corporations for cheaper services so that there is less profit made. Whilst we understand that this is a desirable goal we go one step further to ask for a co-operative way of living, where no profit is produced."

The demonstration was organised by We Want Our Buses Back (WWOBB) and they also held a lobby of the Sheffield City Council meeting on Weds 7th December where they presented a 5,000 name petition. 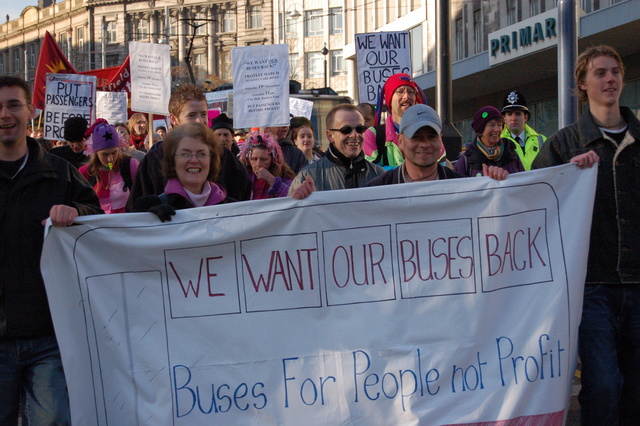 Buses for people not profit

This is an update from WWOBB...


The protest march against First’s fare rises held on Saturday 19th November was a big success with around 300 people on the demonstration which received a supportive response from the public. We now have a membership, email and address list of over 100.

Following that on Monday 21st, Calvin, representing WWOBB, appeared on the Radio Sheffield debate about the future of Sheffield’s buses, and was supported by several members of the studio audience.

The next protest is a Lobby of the Sheffield city council meeting on Wednesday 7th December. The lobby will be held outside the Town Hall from 12md-2pm with a stall, leaflets and petitions, banner and placards, and megaphone. At the council meeting, WWOBB will present another 3000+ signatures calling for the council to take action over re-regulation and re-nationalisation, and will get the opportunity to speak for a few minutes. WWOBB supporters should be able to sit in the public gallery to support our speaker. I hope you will be able to attend part or all of the lobby. The leaflet is attached if you want to print some off, or contact us for more.

As part of the build up to the lobby, WWOBB campaigners will be collecting more signatures and conducting a public ballot in the city centre on Saturday 3rd December from 12-3pm outside the Town Hall. We’re hoping to run several stalls to collect up to 1000 votes in our ballot on the future of Sheffield bus services (ie keep de-regulation, or re-regulate, and/or return to public ownership?). We’ll take the results of these to the council meeting on Wednesday as well as to the press and media to get more coverage. Again any help would be appreciated.

Hope to see you on Saturday and the 7th,