The full list of films is now out for the Sheffield Indymedia's second alternative documentary festival: Alt.Doc.Fest 2: Films from the Frontline 24-26th November at Matilda Social Centre, 111 Matilda Street.

You can download the programme as a PDF file below 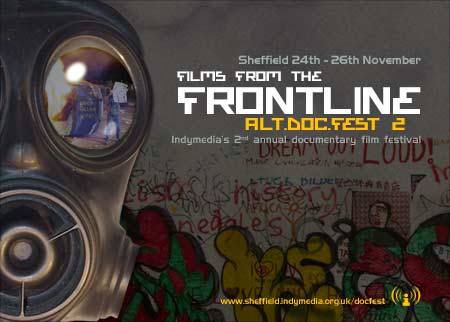 ALT.DOC.FEST 2 - Films from the Frontlines

Pull up a sofa, have a cup of tea, some popcorn and watch documentaries on...

Matilda Cafe
Fancy taking a break from film watching? Then why not hang out upstairs from the film room in the lovely Matilda cafe? The Matilda cafe collective will be serving food and snacks throughout the festival. There will be a hot meal, snacks including pitta breads, salad and spreads, pakora, cakes and popcorn, and maybe more!! All kinds of hot and cold drinks available 'til late!

Hacklab
Can't keep away from checking email? Matilda has a "hacklab", that is a suite of internet connected recycled computers using free software. Feel free to drop in and surf, and check out the free (and better!) alternatives. 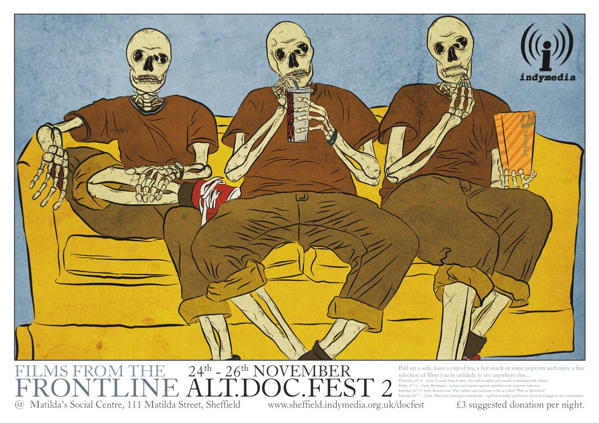 Spreading Propaganda
Entartete Kunst
45 minutes
Entartete Kunst is an anarchist electro label from San Francisco that releases political electronic music that fuses low and high brow culture (think dark, slow hip-hop with Noam Chomsky samples) into a potent status-guo challenging mix. This film offers an intimate look at the artists on this label and their radical views of America through their eyes. Provactive and stimulating, this documentary features a gritty EK soundtrack. (Read more…)

Don't Need You
Kerri Koch
40 minutes
This much sought after documentary charts the origins of the 1990's Riot Grrrl movement through interviews with those involved. Riot Grrrls were unapologetic and in-your-face- activists who acted out against domination and refused to play by anyone's rules but their own. They created a global network that reclaimed music and zine culture and saved many a young woman in the early 1990's. Features interviews with Jen Smith from Bratmobile, Kathleen Hanna from Bikini Kill (now Le Tigre).

Well Done. Now Sod Off
1 hour 30 minutes
A potted and often hilarious history of Chumbawamba. Footage and interviews from the last two decades retrace their early days of communal living and involvement in the 1884-85 miner's strike to the survival of the Thatcher years and the media barrage of the 90's. The Chumbas emerge as a band of anarchist shoplifting pranksters, loved and loathed in equal measures but still an ongoing punk saga, a radical statement in a sea of conservative manufactured bands.

Storming Sarajevo
Desert Storm Soundsystem
30 minutes
It's 1994 and shortly after the Criminal Justice Bill became law in the UK, the Desert Storm free party collective decide to head for Bosnia. Aiming to bring humanitarian aid aswell as throwing free parties the collective survive vehicle problems, subzero temperatures and relentless snow to bring the noise and humanity back to Sarajevo.

Won't Get Fooled Again
Pilton Video
43 minutes
When the G8 leaders came to Scotland in July, seasoned activists and concerned indivivuals were ready for them. Prepared to take to the streets, and make their demands heard, they gave the eight leaders at Gleneagles the welcome they deserved! This arresting and compelling film interspersed with personalised video diaries and reportage from the young people, smashes the myth of apathy and lethargy in the younger generation, and presents a youth - orientated account of one of the most significant weeks in Scotlands current history. Against a background of escalating and menacing police presence - with a surreal quality enhanced by a Rebel Clown Army - it shows their mature and articulate views about; poverty, African debt, global warming, free trade, holy Bob Geldof and the supposed "Lennon and McCartney" of international debt relief - Brown and Blair!

Trading Freedom: The Secret Life of The FTAA
Indymedia (Quebec)
54 minutes
An inspiring film offering an explanation of the FTAA and what it will mean for the people of the American continent, and how they are resisting it. This film has it all - indigenous struggles, working class resistance, women against free trade, media activism and the state repression of dissent. Includes footage from Chiapas, Sao Paulo, Quebec City and elsewhere. The combined efforts of over 100 videographers, photographers, free radio outlaws, writers, editors and rabble rousers. (More…)

The Take
Avi Lewis and Naomi Klein
1 hour 30 minutes
In the wake of the 2001 economic crisis in Argentina, Latin Americas most properous middle class find themselves in a ghost town of abandoned factories and mass rising unemployment. In suburban Buenos Aires, 30 auto-workers decide to collectively take over their abandoned and idle factory. Naomi Klein and Avi Lewis takes the viewers into the lives of the workers as they meet globalisation head on and reclaim their work, lives and dignity. (See web site)

The Yes Men
Dan Olman, Sarah Price, Chris Smith
1 hour 15 minutes
A couple of corporate activist-pranksters impersonate organisations such as the WTO not only at conferences but on TV aswell. Setting up a parody WTO website leads them further into the global corporate world as invites flood in from unsuspecting institutions. Follow Andy and Mike as they satirize global free trade to ridiculous extremes while the experts seem to agree to every crazy idea the couple can come up with. (Official film site)

This is Camp X-Ray
Damien Mahoney and the UHC Collective
1 hour 15 minutes
Following in the tradition of performance art, 'Camp X-Ray', a hard hitting political art installation is placed within the centre of Manchester. A fully operational life size replica of the U.S. internment camp at Guantanamo Bay, Cuba. set out to challenge our apathy over the prisoners held there, this documentary covers the artists and activists involved and local people's opinions on the installation and its impacting message visually and psychologically. Includes a Mosside family visiting who's brother is in camp XRay.

The Sun Doesn't Shine in The Camp
Balata Campaign
35 minutes
30,000 Palestinian residents live in the Balata refugee camp. Between December 2003 and March 2004 the Israelis invaded the camp. The whole population were placed under 24-hour home imprisonment for a four week period without access to food, supplies or medical services. The residents resisted the invasion by breaking the curfew and stoning military vehicles. Contains some incredible footage. (Film site)

Weapons of Mass Deception
Danny Schechter
1 hour 15 minutes
An analysis of the media's biased coverage of the Iraq war and the deception committed by the media with its armies of journalists and propaganda techniques. The indepth analysis raises some startling question regarding not only the coverage of the war but in some cases promoting it. Schechter is a media insider turned outsider as he explores the global media marathon deception. (Film site)

Woomera Breakout
Ska TV
24 minutes
During Easter 2002, activists from around Australia converged upon the Woomera Detention Centre to protest the mandatory detention of refugees. Activists coordinated with the detainees protests from within the detention centre resulting in a mass breakout of 50 refugees. Most were returned but 11 achieved freedom. This incident led to an awareness of the Australian governments detention policies. (Photos)

Jill's Film
30 minutes
An inspiring and beautiful film about the life and tragic death of animal liberation activist, Jill Phipps. The film tells the life story of this incredibly dedicated activist, while weaving in the history and achievements of the animal rights movement in the UK, and the wider social and political issues and movements of the time. A personal window to the often hidden history of resistance movements.

G8 2005 European Newsreel
Indymedia
1 hour 15 minutes
A round-up of the actions against the G8 meeting in Scotland this summer. Follow the clowns, the street parties and the action to stop the G8.

SchNEWS At Ten - The Movie
Schnews
1 hour 15 minutes
Charting the early days of resistance to the Criminal Justice Bill through to recent actions in London - it's a decade of party and protest covering the history of Schnews and its coverage of direct action and free parties. Marvel at how good for nothing lazy anarchists have got it together and kept it together for the last ten years. (Film site)