The M1 carries huge volumes of traffic (some sections up to 160,000 vehicles per day). There is congestion at peak times. The widening is proposed to "reduce congestion and improve both safety and journey time reliability". But the plans are already flawed. When the proposals for the widening were originally agreed, it was noted that the only way to lock in the benefits would be to employ road-use charging. This has not been mentioned in the current documentation. In addition, independent research has shown that you can't build your way out of congestion, road widening and new roads simply encourage more traffic. The government's own studies confirm this. With traffic already predicted to increase by 50% by 2011, there is an urgent need for more long-term sustainable solutions rather than a road building programme that will further accelerate this increase. 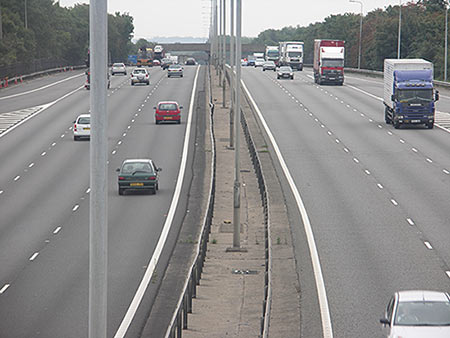 So what are the implications for South Yorkshire?

Tinsley is already a severe air pollution zone. Increasing the number of lanes and hence the volumes of traffic will only serve to exacerbate this already unacceptable situation. Air pollution increases the incidence of asthma and other breathing problems. It has been associated with an increased risk of lung cancer. More people have heart attacks on days when pollution is worse.

With current noise levels, teachers at Tinsley Junior School already have to close the windows so that the children can hear them. Noise levels have been found to impair academic achievement. It can also cause mood swings, insomnia and depression. Increased levels of noise pollution from the motorway widening plans can only increase these problems. The noise barriers that were erected to address existing noise levels were tested and found to have had no effect.

The issue has been seriously raised as to whether pollution levels will get so high along this stretch of the M1 that people living in the Tinsley area will have to be evacuated.

The M1 widening plans are part of a huge national road building programme, which continues to escalate. In spring this year the government announced that twelve more roads were to enter the roads programme. This is despite the Highways Agency being previously asked to look at 'traffic management' for these schemes. This road building programme shows total disregard for the UK's commitment to tackling climate change. Carbon dioxide [CO2] emissions from road transport are actually increasing and currently constitute 18% of all greenhouse gas emissions. Oil scarcity and rising costs should be pushing the development sustainable alternatives.

The protest camps of the anti-roads movement put an end to the road building programme in the 1990s. There is a wealth of experience to build on, and direct action needs to employed at an earlier stage to reverse the government's plans.

Get involved in Earth First! and local protest groups. Groups against the M1 widening are emerging along the route. To get involved in the Sheffield group e-mail info@nowideningm1.org.uk.

There's a national conference against road building and airport expansion on 8th October in Nottingham (contact info@roadalert.org.uk for details).

Other Ideas for Action