Important information for anyone living near Parkwood landfill

Following is an independent assessment of Viridor’s Planning Application to extend active waste tipping at Parkwood in Sheffield. 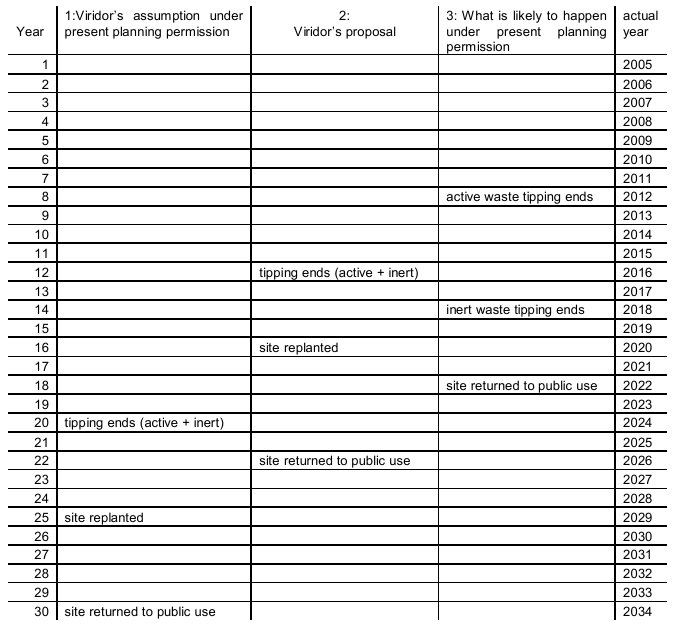 Viridor threaten local residents that under present planning permission, they can tip waste within 5 metres of their homes. They are offering a deal: if they obtain planning consent to tip more active waste, then they will tip only inert waste within 50 metres of homes. We have inspected the plans, and they show that the threat applies to just four homes in Standish Gardens.

We believe that other ways can be found to avoid the tipping of active waste close to people’s homes.

Please read this document carefully, and then send your comments to Sheffield City Council’s planning department (details at end).

Will Parkwood landfill be more or less of a nuisance?

At present the landfill is divided into four cells. Three cells are owned by Viridor, and it has permission to tip active waste into these. Active waste is the kind that rots and smells, and is the source of any excessive numbers of flies nearby.

The fourth cell is owned by Sheffield City Council and leased to Viridor. There is only permission to tip inert waste (such as hardcore) in this cell. This application is for permission to tip active waste in cell 4.

Viridor claim otherwise. They have employed consultants who have produced a report which says that odours from cell 4 (which is further from housing) will not be noticeable. They base this conclusion on the results of ‘modelling’. But this model is based on theoretical assumptions which bear no relation to what actually happens. Clearly the tipping of active waste already causes smells and other nuisances.

Why should we believe that if Viridor is failing to prevent cells 1 to 3 causing nuisances, that tipping active waste in cell 4 will not increase the problems already suffered by local residents?

Recently Viridor were given planning permission to install a leachate treatment plant (to process the foul liquid that runs out from the bottom of the tip) and engines that will use the gases produced by rotting waste to generate electricity. Sheffield City councillors who gave this permission were under the impression that these plants would prevent odours from being produced by the site.

There is no reason for thinking this. At present, gases coming from the site are collected and burnt in flares. The electricity generating engines will simply burn this gas in a different way. They will make no difference to the odours coming off this site.

The threat to Standish Gardens

These are the houses in most need of protection from the tipping. Can they be protected without accepting the rest of Viridor’s proposals? Landfill tax is charged at £16 per tonne of active waste dumped, and will rise by another £1 every year. This raises many millions, some of which should be used to offset the problems caused by landfill. Much of this money has not been spent. Clearly the residents of Standish Gardens are suffering from the problems created by landfill. These problems can be reduced by spending some of this money on creating a 50 metre zone of inert waste, and putting on that a bank of earth (Viridor proposes a 10 foot high ’bund’), or planting trees.

Local councils are responsible for applying for this money. You can ask your local councillor to make this happen.

Why do Viridor want to change the planning permission?

You may have seen letters to residents and press releases from Viridor which claim that “Viridor respects the wishes of local people and supports their aspirations by seeking early completion and restoration of the site.” Please look carefully at our assessment overleaf of whether Viridor’s proposals will actually lead to earlier completion.

Now look at our estimate of what Viridor will gain if this planning permission is granted.

Cell 4 has a capacity of 1 million tonnes. The cost of tipping inert waste is about £10 per tonne (not including tax). This figure is unlikely to increase due to inert waste being unavailable. Viridor have admitted it is difficult to obtain it. Assuming a generous 10% of this is for site operating costs, that would mean that the income from area 4 over its life would be £9 million, under present planning restrictions.

The cost of tipping active waste is currently about £30 per tonne (not including tax). Allowing 10% for operating costs, cell 4 would generate a total income after deduction of costs of £27 million. But the cost of tipping active waste is forecast to rise sharply, to as much as £66 per tonne by 2011. Taking a figure half way between these two of £48 per tonne gives a total income after costs of over £43 million.

The difference between that figure and the £9 million that would be generated by inert waste would be £34 million – the estimated value to Viridor of this planning application. (This information was printed in the September edition of the Burngreave Messenger.)

Viridor bought this site and the Salmon Pastures site in October 2002 for £20.6 million.

How long will the site be open? and when will it be returned to public use?

Viridor say that under their present planning permission (column 1), it will take 20 more years to fill the whole site with waste.

It is likely to be 10 years from the time when the last active waste is deposited until the whole site is safe for the public to walk on it. That would be 30 years from now.

Under the change proposed by Viridor (column 2), active waste tipping would end in 12 years. So the site would be safe and open to the public in 22 years.

Column 3 is our estimate of what will actually happen under the existing planning consent, using Viridor’s own figures.

According to Viridor’s proposal, they can obtain enough active waste to fill 4 cells in 12 years. So that same amount of waste, deposited in the three existing cells, would fill them in 8 years.

The site could be returned to public use just four years later, because that would be ten years after the end of active waste tipping. So what Viridor is telling us about what would happen if there is no change in the current planning permission is misleading. What would actually happen (according to Viridor’s own figures) is that active (smelly) waste would be put on the site for longer under Viridor’s proposal, and it would be longer before the whole site was safe and returned to public use.

If when you have read this, you wish to make comments to the planning authority, write quoting reference 05/02877/ful

Please send copies of your comments to your local councillors. They can be written to c/o Town Hall, Sheffield S1 2HH. Councillors for Burngreave ward are:

You can speak to your local councillors at their surgeries – details on the Council’s web site.