I was involved in all the Rhythms of Resistance actions last week starting with the banner drop at 7.00 Wednesday morning on Park Square roundabout. 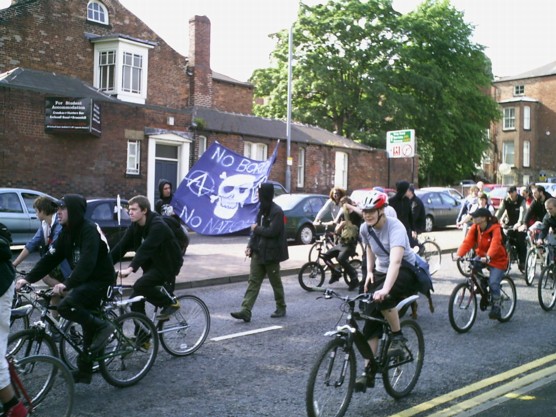 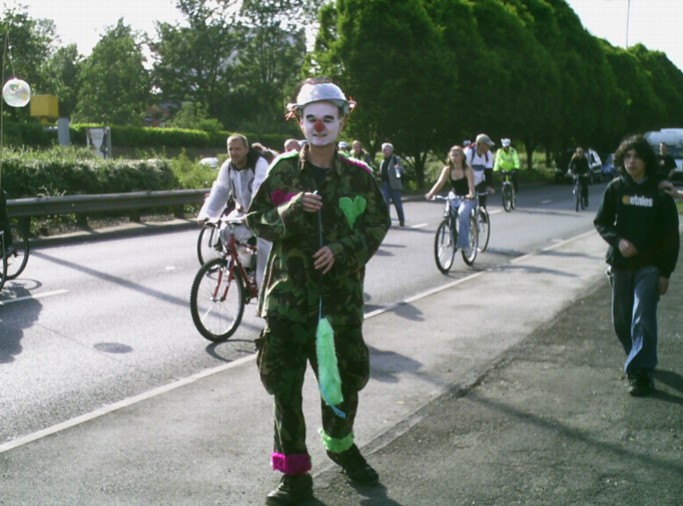 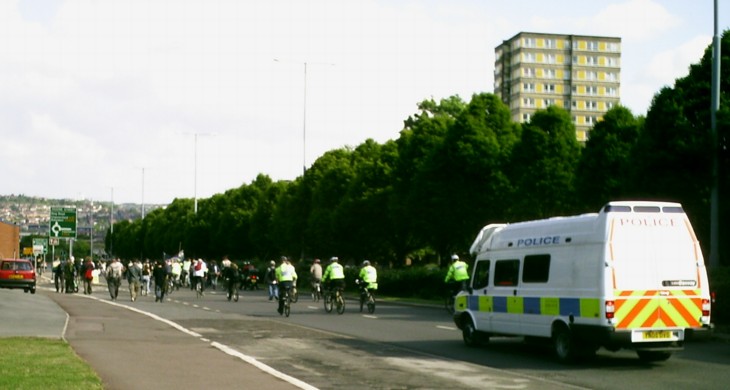 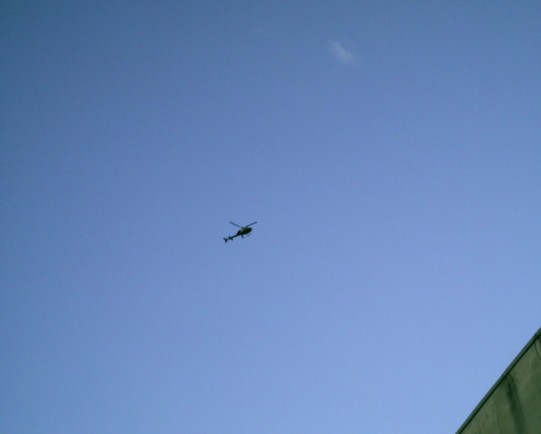 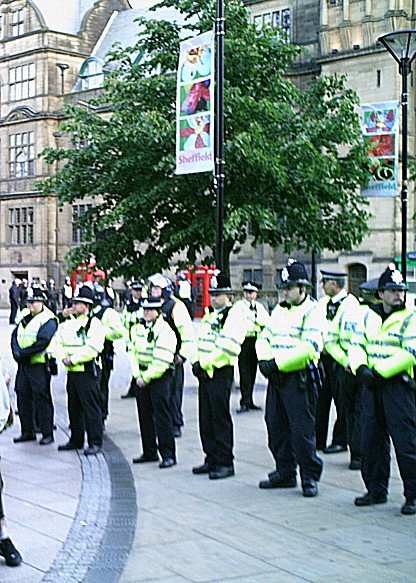 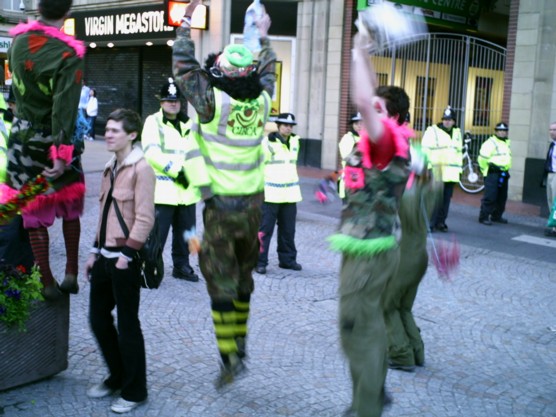 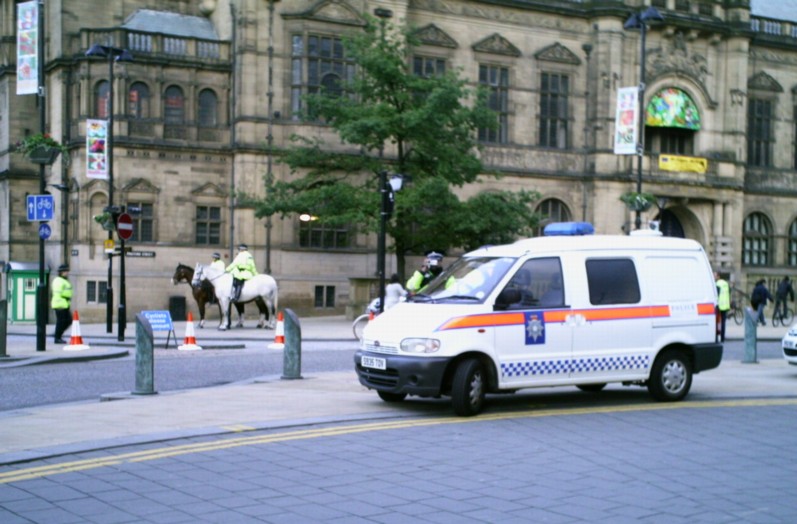 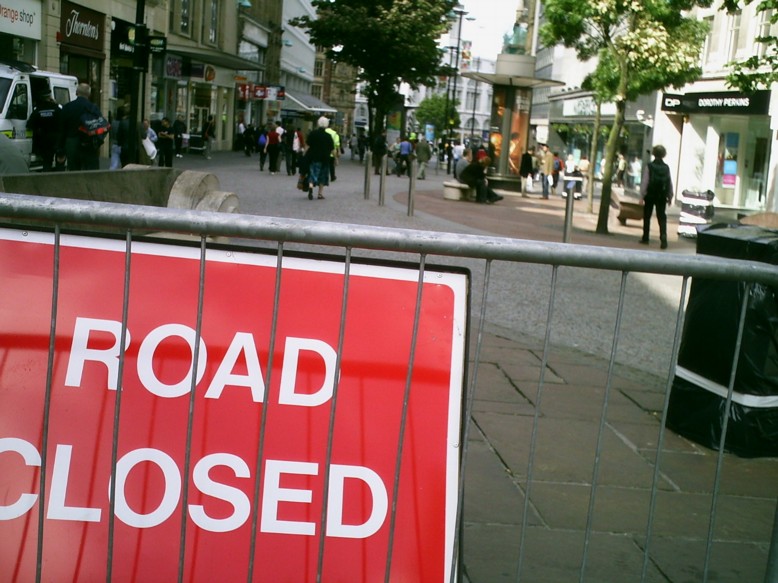 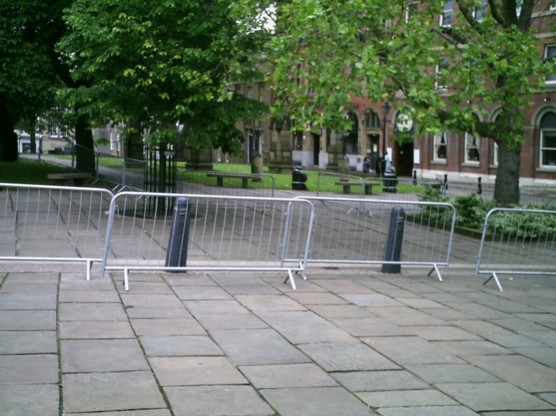 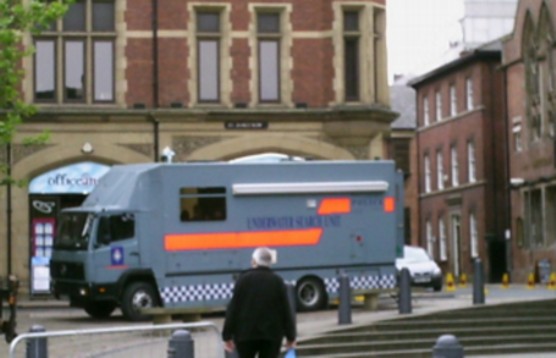 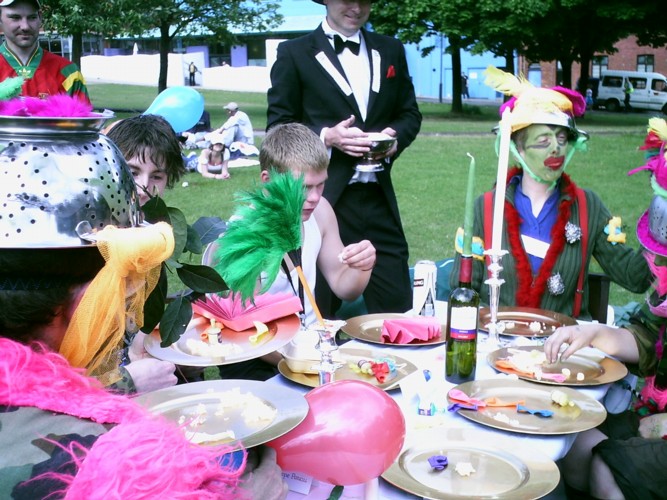 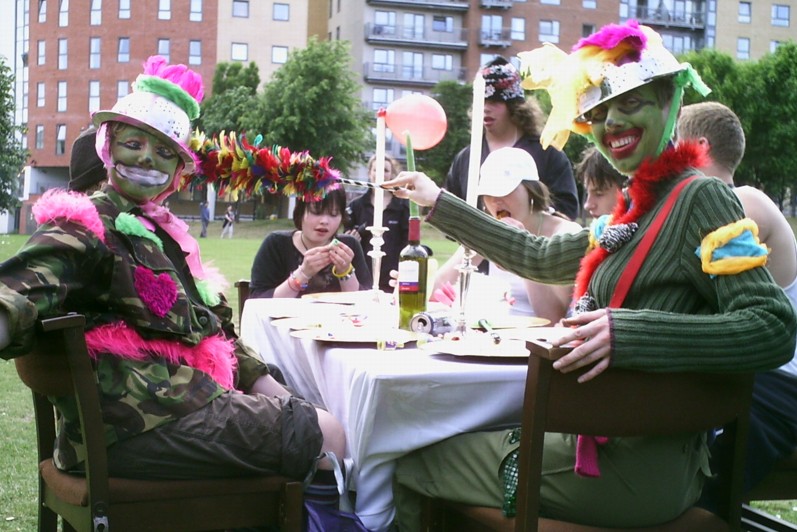 Wednesday.
Our huge pink banner was very visible (pictures on previous articles..) which was accompanied by leaflets given to vehicles at the traffic lights and we played on the roundabout for about an hour. I felt it was successful as it was the start of the ministers being in Sheffield and it was great to show our opposition towards what was happening and to inform people in Sheffield who's only knowledge of it otherwise may have been the disruption to their daily lives with road blocks and police rehearsing their convoys around the city (very hard to miss, especially around the city centre). It was also surprising that the police allowed us to play and didn't really bother us. In all honesty I expected them to stop the traffic on the roundabout and drag us into their vans immediately after realising what we were doing - but they only took photos and filmed us (they always want momentos...)

Later on (about 17:00) I tagged along with the Critical Mass. I'm rubbish at estimating numbers, so i wont, but there were quite a few people on it and to start with it took a good route, it headed down Hanover way (about halfway down they were greeted by the clown army, cleaning sheffield with their fantastic feather dusters) then going round the roundabout and heading up Ecclesall Road, then swiftly turning back again at the Shell petrol station. Then, after a short stop headed back to the roundabout which was circled twice I think and then the mass cycled towards the moor. Now this is where I lose track of road names, but after the clowns stopped off at Mc Donalds for a smackrel of tactical frivolity we got to the road block cutting off Arundel Gate which the group decided to go through. This I feel the need to criticise because arundel gate was empty and the police then started to try and pen in the critical massers, I think if it had sayed on the open roads it could have carried on for longer and also be een by more people. Anyway, this was the point where I headed away from the critical mass as I felt the need to have a drum and to join my band and play. (so I apologise as I don't know what the critical mass did after this point)

I went with the band afterwards and we met up with some sambistas from Manchester who had come to join us for the evening. We then went to the top of fargate where there was a standoff going on between the police and the protesters. We started playing and the atmosphere seemed to change to a more relaxed one and we headed down fargate. The police don't like the fact that large groups of people move of their own free will, so once we got to castle square they began to get pushy and tried to set an example by arresting one guy who I think was being arrested for "Swearing at an officer" although they neglected to mention that this person only swore at the police AFTER he had been physically held up against the wall by one of them and treated pretty badly as I was told afterwards. Then the riot police arrived and the situation did't feel as jovial a it had been. Back on fargate about 15 minutes later we played, keeping the atmosphere moving and happy long with the clowns. The police (and their dogs) had formed lines between us and the winter gradens and stayed there until long after I had left. I don't think we were heard by the ministers, but I think they knew that something must have been going on and that they were not welcome, surely all the police must have been there for a reason...

Thursday.
I went via the cathedral at about 14.30 to see what I could see. The place was crawling with police and I was shocked to see a van on which was boldly printed ‘Underwater Search Unit’. This I felt was odd, as there are no rivers or lakes by the cathedral, or indeed any oceans or any open stretches of water whatsoever. I was later informed that they had been searching the sewers for bombs. Rediculous. What more can i say?

I cycled to Devonshire green at about 16.30 to find the clowns there having their own dinner at a table set out for the G8 ministers (although they never turned up) and ate their meal before the make poverty history dinner began. They were joined by bystanders who came to eat with them and we observed by two intrigued policemen.

Once again I met up with RoR (including a drummer from the Rhythms of Resistance band in Berlin on her way to Edinburgh) and went as close as we could get to the Cutlers Hall which was the road block at the bottom of west street, where we joined up with the protesters waiting for the ministers. After a while we saw two minibuses arriving but we were never sure if they were the ministers (and I assume not as they had lots of assistants and assistant’s assistants etc. from hat I can gather) then headed back to Devonshire green with the crowd. The police tried to stop us by standing in a line across West street, we promtly walked through it and seemed to confuse them greatly. And then we went to the make poverty history thing.

After the rice dinner we joined up with the Sheffield Samba Band and played on the road next to the green and reclaimed the street with a lot of other people. We then went onto west street again, I think with the intention of getting closer to the Cutlers Hall, but were swiftly cut off by the police and shoved down a side street where we found ourselves cordoned in at both ends of the street with nowhere to go. Well we decided to make the best of the bad situation and surprise surprise, we played some more samba, helped keep spirits high for most of the time and stopped every now and again and the crowd chanted and sang, trying to be heard by people outside the cordon. I was informed by someone who was part of the group of people in front of the band after about an hour of being inside the cordon that they were going to try and break through the police in front. I thought this was fine as we were behind and since drums aren't very helpful when trying to push through police I thought we were in a pretty good position. We could just follow the procession slowly whrever it headed after that. I was wrong. About half an hour later the people in front pushed forwards, which was fine for a few seconds, and we followed peacefully, but one of the police behind us shouted "move forwards!!" and thats when the crush happened. They mowed into the back of the band, shoving us forwards, meanwhile the crowd in front had been stopped by the police, and were being pushed towards us. Now logically, both sides would stop pushing, but no, this is stupid policing we're talking about here. They kept on crushing us, and everyone around me was colliding into huge aluminium drums. I was really frightened and angry at this point, was this going to anouther Hillsborough diaster? I was in a lot of pain, I had policemen pushing and jabbing my back and I had two drums digging into my legs, over a few minutes they had been shoving me so hard that my feet were off the ground, I was screaming at them to stop, looking the police in the eyes and flailing my legs, the only thing i could move, but the fuckers wouldn't stop, if anything they hit me harder. I could feel my knees grinding against metal. Eventually there was a breakthrough. We were all pushed forward, past the front line of police. I was physically trembling at this point, so angry, frusrated and upset because it was so completely unnecesary! What goes through their minds I dont know, but I came out black and blue along with other people who had had the same or worse. We were eventually allowed to process back to Devonshire green and played for a while longer to let off some steam and relax again. We said our goodbyes and got home at about 23.00 extremely tired. Even after the crush I still felt it was worth it, we had tried to get heard, maybe we did, I don't know, but I have lost yet more faith in the police force (not that i had any to start off with) and once again we saw their true colours. I feel even more angry that the G8 is going on than I did before.

The next morning we carried out our last action, the rude awakening for the ministers and a pretty clear "fuck off". We teamed up with the clowns and played right outside the Marriot Hotel. They heard us. We were heard streets and streets away so i can't see how they didn't. A nice way to end the week. Very effective, loud and unexpected.


Thoughts to carry us through..
The clowns were fantastic throughout the week. On the critical mass they cheered on the cyclists and were gving out lollypops to passers by. A great way to engage people, and also because they were on two legs and not on two wheels they could do things the cyclists couldn't(like a spur of the moment jump on McDonalds) I think bringing different forms of action together is the way forward (clowns and cyclists etc.) because although single forms of action can be effective, it is good to share experiences and then learn from them. For example, samba on its own was great on wednesday morning with leafletters and a banner, it was loud and effective at grabbing attention, but I think it could have been improved by doubling up with the clowns, which definately made Friday morning a better experience, not only because it cheered us up but also because the police don't know how to handle them and outside the Marriot, even some the police were smiling (an improvement on thursday nights crush i think)