While people are busy being hooked on watching yet another Big Brother
series on TV the fiction rapidly moves towards reality. The UK already
has more CCTV cameras than any other country in the world. Your emails
can be read and the history of your websurfing analysed without a court
order by six government agencies and the Police. Your land line can be
tapped. Your mobile phone acts as a tracking device and vehicles can be
tracked across the country through number plate recognition software.
The Police now have the power to access your NHS records without having
to establish that a criminal act has taken place. The measures taken by
the UK government in the name of the "war on terror" have severly
damaged civil liberties and human rights.

The slide towards a Big Brother state accelerates further this week.
The G8 Justice and Interior Ministers meeting in Sheffield
discussed avenues for advancing the the so-called "war on terror",
national security and combating international crime and illegal
immigration, all of which are likely to have further negative impacts
on civil liberties. For the UK goverment part of this strategy is to
introduce a national identity scheme making it a legal requirement for
its citizens to carry ID cards. 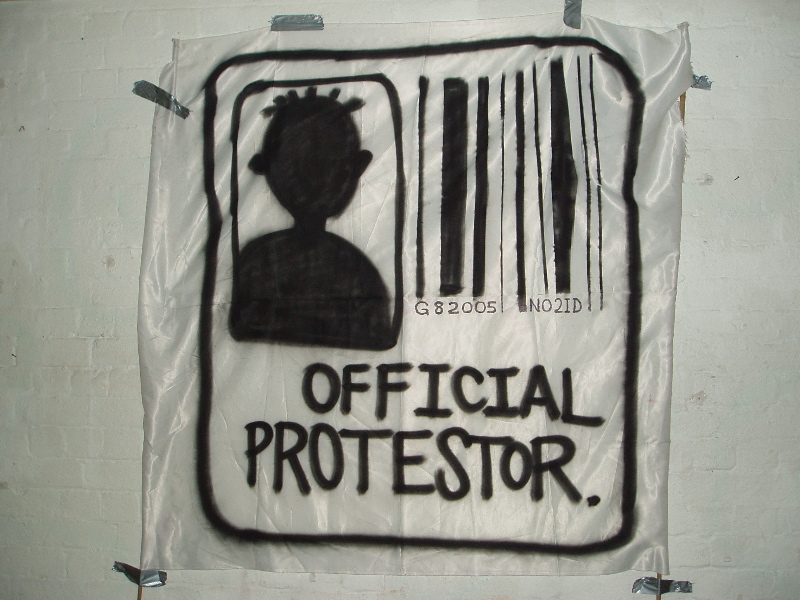 Most of Europe has had ID cards since the Nazi and Soviet occupations
introduced them as a means of population control. In Britain the
wartime system of carrying ID cards was brought crashing down when a
single citizen refused to carry the card. Clarence Willcock won a High
Court case in 1951 when the judge ruled ID cards an annoyance which
"tended to turn law abiding subjects into law breakers".

Despite the continuance of ID cards in the rest of Europe, the threat
of terrorism there has clearly been no less of an issue than in the UK.
Terrorists have operated in Germany and Spain where both countries have
ID cards. Even in the USA, the September 11th hijackers all had vaild
papers. Under severe criticism, David Blunkett, who initially proposed
ID cards while he was Home Secretary, finally had to admit that ID
cards would ever only play a marginal role in counter-terrorism.

The next argument used by government to justify ID cards was that they
were needed to tackle illegal immigration. However, opponents argue
that ID cards won't stop illegal immigration in to the UK, just as it
hasn't stopped illegal immigration into the rest of Europe. The other
argument put forward by government is that it will stop identity fraud.
But many strongly suspect having a single document as identification
simply makes fraud easier not harder! Identity fraud, it is argued, is
best tackled by personal vigilence and using multiple checks rather
than eroding people's civil liberties and forcing people to carry cards
so that they can be checked at any time.

The ID card system does not just involve carrying the thing. It
involves the creation of a computer database called the National
Identity Register, which will contain information about everyone who is
over the age of 16 and in the UK for more than 3 months. It will
include all the names you have ever used, date and place of birth, all
the addresses you have ever lived at, your nationality and immigration
status and physical characteristics which can be used to identify you,
including an iris scan, fingerprints and DNA. The number assigned to
you on the register will be used in the future to link all government
databases on you, for example NHS records.

The Police, Inland Revenue, Customs & Excise, Security Services,
Immigration Service and Department for Work and Pensions will have the
right to access your file. The government will also have the right to
cross check records held by your bank, insurance companies and credit
checking agencies. Given the issues on the agenda for
the Ministerial
meeting in Sheffield
— "international law enforcement co-operation, focussing on... the
expanded use of DNA - it is likely that data will be shared with
other counries in the future."

Private companies are also likely to be asking you for this number.
Can the government or the private companies running the scheme really
be trusted to keep all the information on its citizens safe? Even if
this is the case, with all the information on you referenced to one
number, it won't be too hard for companies to follow the links and
access other information on you. The private sector seempretty keen on
the scheme. On the 6th June the Home Office, in collaboration with
Intellect (the IT industry trade body), held an ID Cards conference
(www.defy-id.org.uk)
entitled "Towards Procurement & Implementation"
sponsored by Atos Origin, Axalto, Detica, EDS, Fujitsu, Siemens
Business Service, and Unisys. These companies are also members of an
"Parliament-Industry" group called EURIM (www.eurim.org.uk).

Business will be keen to underline the importance of an ID scheme
beacuse a big scheme means lucrative private sector contracts and
potential access to a handy means of linking up information on people.
(Just imagine the audit trail they could get from linking up your day
to day activities - it goes way beyond supermarkets only knowing what
you eat and banks only knowing where you spend money). For some
companies it might even mean access to the national database itself.

The Second Reading of the
Identity Cards Bill
in parliament is approaching. The
Bill creates a whole new set of offences including:


No2ID argue that the ID card scheme would fundamentally
change the nature of the relationship between citizen and state. Where
government should be the servant of the people, people would become
dependent on the permission of the governmnet to exist, insulting
rights to privacy and threating liberty. NO2ID have
initiated a pledge
for
those who will resist compulsory registration for a State-issued ID
card. The money raised will be used to create a fighting fund for those
resisting ID cards.

In 1987 in Australia and attempt to introduce such a scheme resulted in
massive oppposition including civil disobedience. In the UK there have
been days of action
against ID cards and the Big Brother state.