Sheffield Prepares to Welcome the G8

The Justice and Home Affairs ministers from the G8 countries are meeting in Sheffield from Wednesday 15th until Friday 17 June. The issues to be discussed at the Sheffield ministerial meeting include counter-terrorism, migration, law enforcement, the expanded use of DNA and legal affairs. People in Sheffield have co-ordinated a number of actions and events against the G8. Full details of these events and a timeline can be found on the Sheffield Against G8 website. 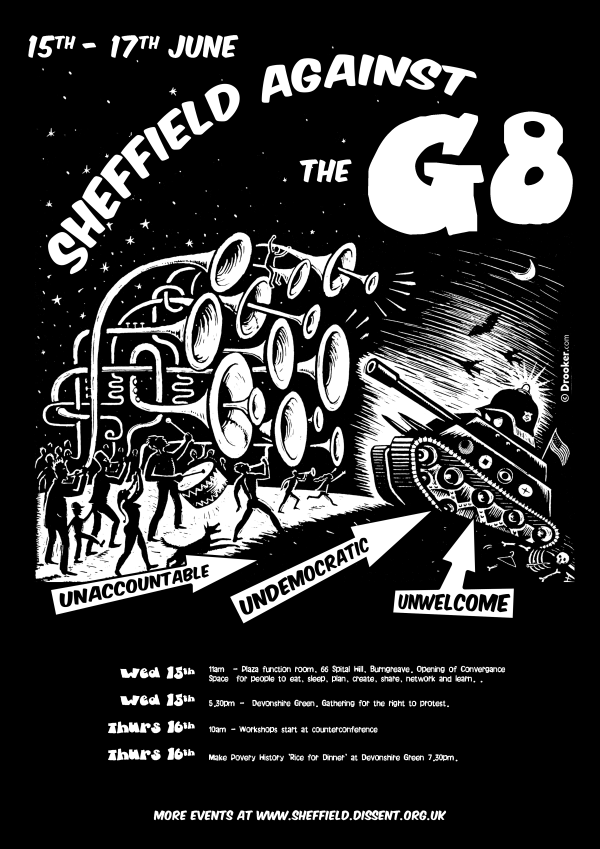 Sheffield Against the G8

The ministers will be meeting at the Marriott hotel in the suburb of Nether Edge, less then 2 miles from the city centre [streetmap]. On Wednesday 15th evening the Ministers will be dinning in the city centre at the Winter Gardens on Surrey Street, near the Tourist Information office and Crucible theatre. Thursday night will see them again travelling into the centre for a dinner at the Cutlers Hall on Church Street, near the cathedral. Meetings will conclude on the Friday. A significant number of streets and businesses in the city centre are being closed down (policing details) to ensure peace and quiet while the ministers dine.

As anticipated, people in Sheffield have been denied the right to stage effective and visible protests against the G8. The only space available for protest is a pen on Devonshire Green, well away from the Winter gardens and the Cutlers Hall. The police have invoked special measures to prevent protests, informing organisers that no marches of any size will be allowed in the city centre during the summit and that any such protests will be met with force and arrests. A petiton has been put together to object to the clampdown on protests in Sheffield and the issue is on the agenda of the Council meeting on 1st June.

Despite this, a week long timetable of events action and education against the G8 in Sheffield is coming together. Things kick off on Saturday 11 June with a march against the G8 called for by Sheffield Stop The War Coalition, starting at 10.30 meeting on Devonshire Green (details). Prior to this at 8.30 there will be a Critical Mass bike ride to join up with the march. On the afternoon of Saturday 11 June, the third annual Peace in the Park community festival will take place, where you will be able to lean more about why people are taking action agaisnt the G8. The festival will also play host to the Laboratory of Insurrectionary Imagination, a combination of live art and cultural resistance training camp. The Laboratory will also be providing Clandestine Insurgent Rebel Clown Army training over the weekend at the Plaza Function Room on Spital Hill in Burngreave. June 11th ends with the 2012 Show.

From Wednesday 15th June convergence spaces will open in Sheffield. For details of the convergence space and accommodation contact 07786907084 from Wednesday 15th June or check www.sheffield.dissent.org.uk. You can also email sheffieldagainstg8@yahoo.co.uk for any specific queries regarding accommodation. Food will be provided by the local food collective for donation and there will be a independent media space. Coming to Sheffield makes the perfect stop off for those heading up to Scotland early to help with preparations for the mobilisations against the G8 leaders summit.

An Insurgents Breakfast will be held at the convergence space on the morning of Wednesday 15th, followed by a Weapons of Mass Information action taking to the streets to get people informed about the G8. At 4.30pm there will a Critical Mass Bike ride, gathering at Devonshire Green, followed at 5.30pm by a demo on Devonshire Green for freedom of speech and the right to protest. The idea of the protest is to express the violation of human rights through people being silent, with mouths taped and hands cuffed, carrying banners that will be blank or blackened so they will say nothing.

On Thursday 16th June there will be a counterconference taking place in the Convergence space, with workshops focused on countering the G8 policy agenda. Workshops will be hosted by the Make Borders History Campaign, N02ID, and others will cover climate change, freedom of movement and helping Africa. In the evening at 7.30pm on Devonshire Green there will be a Rice for Dinner gathering hosted by Make Poverty History, where people will eat a meal a kin to that eaten by the majority of people around the world while the G8 ministers dine in splendour at the Cultlers Hall.

The counterconference will continue throughout Friday and finish off with a party at the convergence centre to celebrate humanity against the inhumanity of the G8.