Proposals are being put before the council for a massive enlargement of the Parkwood Landfill site, allowing a substantial increase in capacity from just 266,000 tonnes a year to a staggering 1 million tonnes. The Parkwood Landfill site is on the edge of Shirecliffe and overlooks many areas including Hillsborough, Upperthorpe and Walkley. Local residents are fighting these proposals and demanding a public consultation. However, their on going investigation into the proposals is raising more questions than answers. Residents are beginning to see a possible link emerging between the new massive incinerator in Sheffield, which is nearing completion, and the proposals for the enlargement of the Parkwood Landfill Site. If under these proposals the Parkwood landfill site was to have its suspended special waste licence reinstated, the expansion of the landfill site would enable the ash from the new Bernard Roads incinerator to be dumped there. 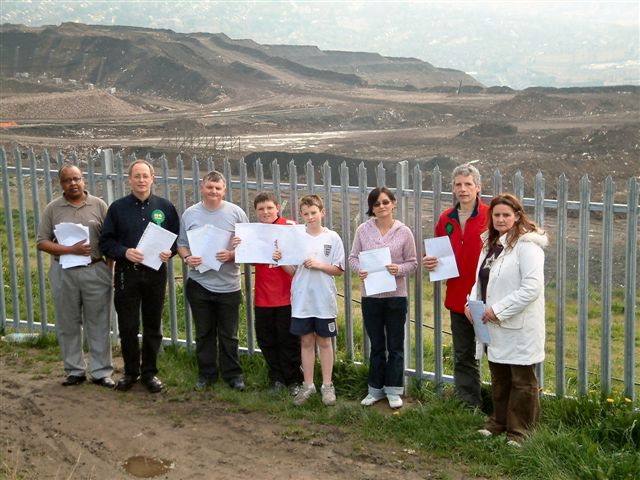 Local residents with petitions against the expansion plans

In addition to the proposed expansion of the Parkwood Landfill Site, Viridor, the operators of the site, also want to build a gas utilisation and a leacheate treatment plant within the area. (Leacheate is created when water runs through a landfill site). Local residents and environmental campaigners are concerned that the gas utilisation plant will be a hazardous blot on the landscape until 2050 and that the leachate treatment plant will be producing hazardous waste in its treatment works until 2035. Campaigners report that Viridor have approval from the Environment Agency for these proposals and that permission will also be sought to deposit the potentially toxic sludge in the ground. This potential dumping of toxic sludge will neither be confirmed nor denied by the Environment Agency. Instead, the Agency insist until the sludge is tested they will not know one way or another whether the material is hazardous.

On Friday 6th May (at a time yet to be arranged) these proposals are going before the Sheffield Council planning board. Campaigners believe that the local council seems prepared to give Viridor's proposals the go ahead. The local protest group, Parkwood Landfill Concerned Residents Group (backed by nearly 2000 signatures)want this planning decision to be delayed until they have had a properly informed public debate. The group met with the Environment Agency on Tuesday 3rd of May to discuss problems and concerns over Parkwood Landfill Site in advance of the planning board meeting.

It seems that Sheffield people have been repeatedly mislead over the plans for the landfill site. Initially people were told no waste would be dumped near homes without a new planning application and public consultation. However it appears that local planning officers have processed these new proposals under an old 1986 planning permission. In addition, local people were promised this site would never be a hazardous waste site again. This was after 7 tonnes of industrial batteries, stored in a plastic container and with some containing lithium, exploded releasing mercury into the air while people watched. In this context local residents and action groups were told the leachate facility was an environmentally friendly reed bed based one and the gas facility was for capturing the gas of bricks and building rubble - but bricks are inert waste and do not produce landfill gas! Many people have since bought houses in the area under the belief that the Parkwood site was shortly going to close, landscaped and made into a park and golf course. This has not happened.

One person has even photographed a large truck being buried in the Parkwood site. Viridor were challenged over this and reported that this was a legal activity.

Local Residents are subject to constant unpleasant smells and noise that comes from the Parkwood Landfill site. Local people are worried that their health is suffering as a result of pollution coming from the landfill site. The health survey undertaken of the area looked at just one in ten people. The result didn't match the amount or forms of illnesses that residents are seeing among their families and the surrounding community. The community want regular health monitoring for all the people in the area. Concerns about the health impacts and a high reported rate of cancer amongst people living in the area of the Landfill site is said to be the reason why a few years previously David Blunkett asked local MP Richard Caborn to look into local people's concerns about the site.

For a bird's eye view of Parkwood Landfill site go to the top of Standish Way in Shirecliffe and you will be amazed.

For more information on fighting the proposals contact Paul Antcliffe Spokesman for Parkwood Landfill Concerned Residents Group on 0114 2762353 or paul@paulantcliffe.wanadoo.co.uk