The first European tour by Venezuelan women, began in London (via Barcelona) on 13 March. Nora Castañeda, president of the Women’s Development Bank (Banmujer) and Angelica Alvarez, promoter co-ordinator of Banmujer in Bolivar state received a warm and enthusiastic welcome at the packed Crossroads Women’s Centre, base of the Global Women’s Strike. The strike co-ordinated the tour as part of its activities for International Women’s Day and the UN Year of Micro-credit. 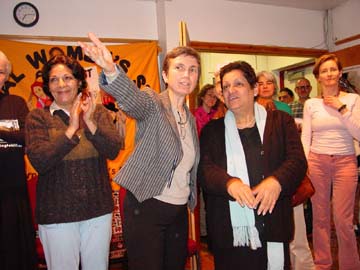 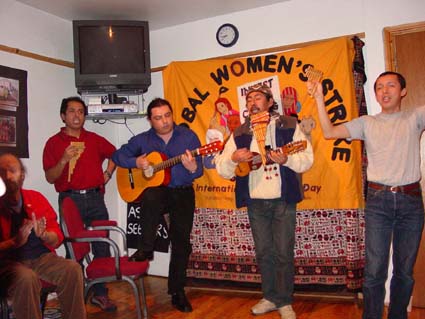 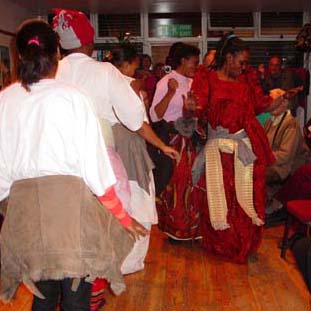 Dancers from the All African Women's Group at Reception 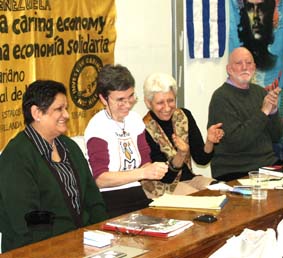 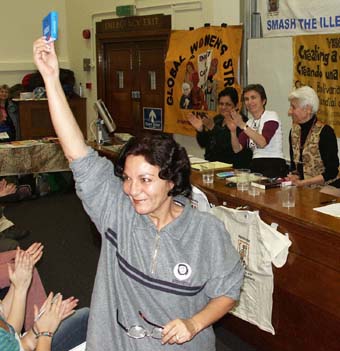 Angelica with Venezuelan Constitution at LSE 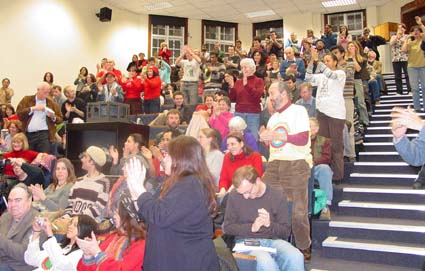 The audience at LSE 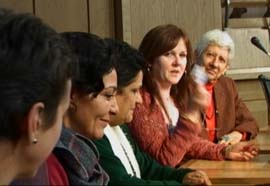 In the Scottish Parliament with MSP Rosie Kane 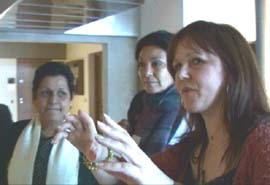 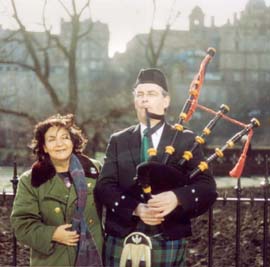 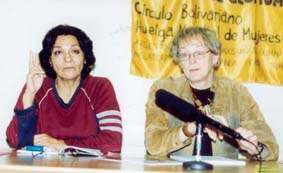 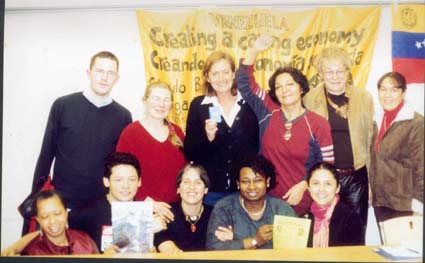 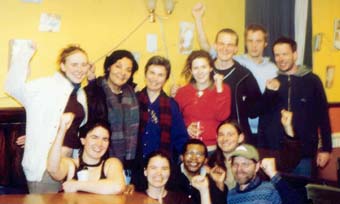 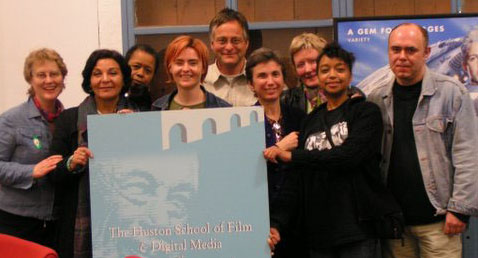 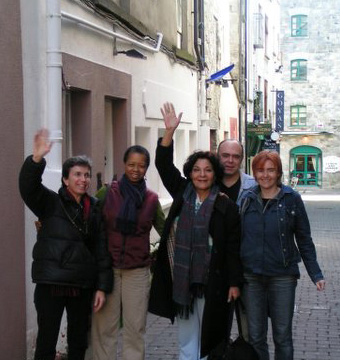 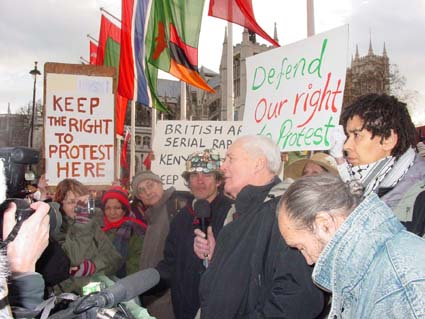 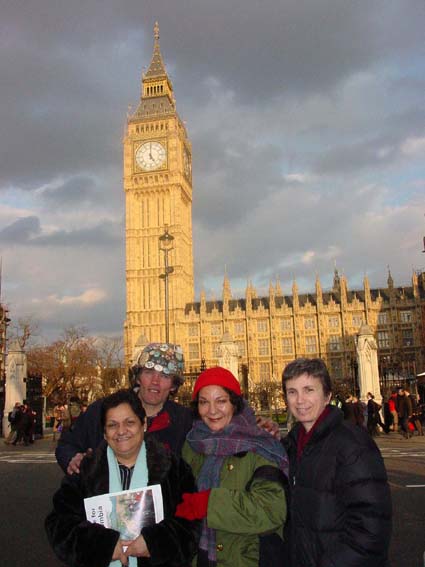 With Brian Haw in Parliament Square 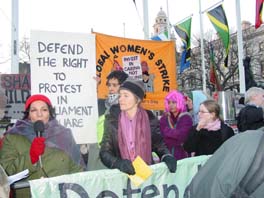 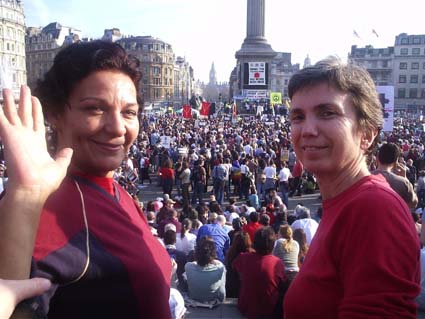 Dancing by the All African Women’s Group and live music by four South Americans, two of whom are Indigenous, expressed the joy we felt at this opportunity to meet and learn from Venezuelan women who are spearheading the revolution.

Apologies came from MPs, MEPs, a London bishop, the Cuban Embassy and many others who had been unable to shift busy schedules. One of them, Caroline Lucas, Green Party MEP, responded to our request for support by writing to the External Affairs Commissioner of the European Parliament welcoming Banmujer, expressing concern that “opposition to the Venezuelan government’s programme may be detrimental to micro-credit projects and those with similar objectives” and questioning “any attempt by the US to interfere with the policies of a democratically elected leader”.

On 14 March Ms Castañeda gave a rousing speech at the London School of Economics dispelling lies and propaganda by hostile national and international media. She gave a historical context to the Bolivarian revolution – hundreds of years of European colonization which slaughtered and enslaved millions of African and Indigenous people, the killing work on the slave plantations, the 19th century war of independence, and the 20th century corrupt democracies ruled by corporate interests which stole the oil revenue and left 80% of the Venezuelan population in poverty, the majority of whom are of African and Indigenous descent.

Wherever she went Ms Castañeda explained that “Women are the carers of the species, there is no work more important than that and society has a debt to women.” She described how the 1999 constitution was won after the newly elected President Hugo Chavez made good his pre-electoral promise, and how women and Indigenous people in particular had picketed daily over four months to ensure that their proposals would be included in the constitution. Article 88, which recognises work in the home as “an economic activity that creates added value and produces social welfare and wealth”, and entitling housewives to social security. Article 14 of the Land Act prioritizes woman-headed households for the redistribution of idle land to those ready to work it. And the creation of micro credit institutions, starting with Banmujer which has distributed 51,000 credits so far, is crucial in the fight against poverty.

She spoke of Vuelvan Caras – turn your face, the new mission named after a decisive battle against the Spanish monarchy during the war of independence – aimed at training people for a caring non-competitive economy based on co-operatives and mutual support, and the development of agriculture. She stressed the importance of food security to counteract any possible food blockade as 65% of Venezuela’s basic foods are still imported.

Venezuelans defeated first the 2002 US-backed coup and then the sabotage of their state-owned oil industry, and won the referendum in August 2004 by a 60% vote, reaffirming Hugo Chavez as president. Ms Castañeda made clear that people are determined to defend the Bolivarian process and its gains at any cost. Chavez, voted in eight times, more than any other president in the world, continues to have widespread grassroots support, especially among women many of whom are single mothers. She stressed the importance of international solidarity and thanked people for their support.

She received a standing ovation by the 250-strong audience at the LSE, which included many Latinas/os, students and community activists of different races, ages, incomes, sexual preferences, etc. The meeting was chaired by the LSE Fight Racism! Fight Imperialism! Society and introduced by the historian Richard Gott. Ms Castañeda was introduced by Selma James, co-ordinator of the Global Women’s Strike who had introduced her in the 2004 US-tour.

The next day, Ms Castañeda and Ms Alvarez met with Rosie Kane MSP at the Scottish Parliament, mother, environmental and anti-nuclear activist and member of the Scottish Socialist Party (SSP). Other SSP members and a delegation from the Basque country were delighted to meet them. Ms Kane presented the following motion to the Scottish Assembly:
US plot to assassinate President Chavez and visit to Scotland of Women's Development Bank
This Parliament notes that Venezuelan President Hugo Chavez has accused the US government of plotting to assassinate him for refusing to privatize and hand over to US corporations the oil and water that belong to the Venezuelan people; condemns any attempt to overthrow popular elected governments whilst preaching democracy; and welcomes to Scotland as part of their European tour Venezuela's Women's Development Bank, which aims to "eliminate poverty by giving power to the poor, creating a caring economy, an economy at the service of human beings, rather than human beings at the service of the economy".

The tour continued at Napier University in Edinburgh, where Angelica Alvarez described her experience of fleeing Chile as a young mother and student activist, and being welcomed by people in Venezuela.

Nora Castañeda then returned to Caracas via Barcelona where she was hosted by the Generalitat (government) of Catalunya, the Catalan Women’s Institute, the Catalan Agency for Development Co-operation together with the Women Count Network. All were moved by the commitment of this powerful speaker, and the achievements of Banmujer’s micro credit programme.

Angélica Alvarez continued the tour, speaking in Leicester, Leeds, Manchester, Nottingham and Sheffield. Latin American, women’s, student and academic union societies, Cuba Solidarity groups and other community activists were delighted to hear how grassroots Venezuelan people are taking charge of their societies through organizing in different “missions”. Barrio Adentro (Cuban doctors and dentists with Venezuelan nurses bring free healthcare and medical training to the poorest neighbourhoods), Mission Robinson (literacy for all), Mission Ribas (secondary education) and Mission Sucre (preparation for free university education), Mission Viviendas (building good, affordable public housing) and Vuelvan Caras mentioned above. The majority of people involved in the missions are women from the poorest communities, rural and urban. Women were also the majority in the Electoral Battle Units which were instrumental in winning the 2004 referendum and last October’s regional elections.

Some people were surprised to hear how Chavez had put the military to work with the community, building housing, bringing food for students in schools and helping people to grow organic food on urban allotments.

Ms Alvarez who is originally from Chile, conveyed her experience with the Chilean revolution, which was defeated by a US-backed military coup, had fed into her work with the Bolivarian revolution. She described the work of Banmujer giving low interest credit to women who have never had any financial access, including Indigenous women involved in eco–tourism, women of African descent and others doing craftwork, hairdressing, organic farming, Indian vegetarian cooking, and much more.

Banmujer funds projects which complement each other, promoting a community chain of production. The Network formed by the Users of Banmujer encourages collectivity and has 600 active members in Bolivar state alone. With the micro credit Banmujer provides, women are achieving economic independence in the family and community, gaining new respect for their work especially from male partners. With the income generated, they support not only themselves and their families, but also others in the community who may otherwise be destitute.

When Ms Alvarez spoke in Galway, Ireland, she received a standing ovation. Nina Lopez, who had translated during the tour, introduced “Talking of Power”, the new Strike film she directed on changing power relations in Venezuela, featuring Ms Castañeda and Ms Alvarez. The event, sponsored by the University’s Women’s Studies Centre, was held at the prestigious Huston School of Film and Digital Media and opened by director Rod Stoneman, who praised the film and committed himself to circulating it.

Everywhere Ms Alvarez spoke with a determination and openness that reflects the confidence and power of the grassroots movement she represents. Lively informal discussions followed each meeting as people were gripped by what they were hearing. She invited people to Venezuela, especially for the 16th International Youth and Student Festival in August 2005, inspiring many to join the thousands who are already expected.

Ms Castañeda and Ms Alvarez visited the Global Women’s Strike anti-war community picket in Parliament Square and met Brian Haw who has been camping there for over three years in protest against the warmongering genocides across the road. They also met with Frances O’Grady, vice chair of the TUC, and Ms Alvarez met with Louise Richards, director of War on Want. Ms Alvarez was also happy for the opportunity to take part in the anti-war march in London on 19 March.

They were interviewed by several newspapers. Major interviews with photo have appeared in the Morning Star (22 March) and the Guardian (24 March), and are expected shortly in Aviu and El Viejo Topo in Spain.

Ms Alvarez’s tour ended in Spain, where she spoke at events hosted by the universities in Malaga and Granada, the Granada Federation of Women’s Organizations and the Women’s Institute of Andalusia, followed by a long TV interview.

Having charmed everyone, she left us all amazed with her extraordinary energy. As Spain tour co-ordinator Sara Williams commented, “We’re all exhausted except her!”
The tour built on years of the Strike’s work and the successful visit of President Chavez to Spain in November 2004. For the first time, women’s organizations and feminists in Europe heard first-hand about the Bolivarian process, and solidarity collectives, left wing organizations and trade unions had to acknowledge the centrality of grassroots women to the revolution.

Nina López, international tour co-ordinator, Maggie Ronayne and Didi Rossi, co-ordinators of the tour in England, Ireland and Scotland, and Sara Williams, co-ordinator in Spain thank all those who worked in the co-ordinating groups in Barcelona and London, contributing time, ideas, contacts and enthusiasm to make this an outstanding tour.

To read the interviews and for copies of the new Global Women’s Strike film about Venezuela “Talking of Power”: www.globalwomenstrike.net

womenstrike8m@server101.com
For more photos of the tour go to: