Friends of The Earth Interview at Derby M17 Protests 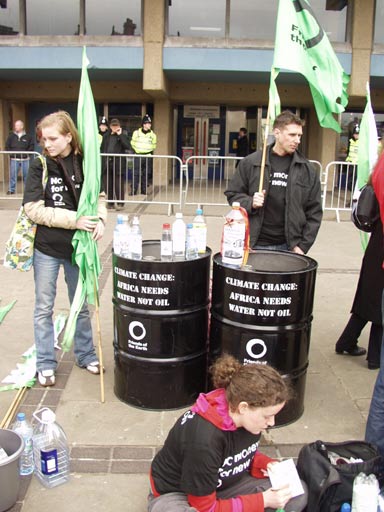 
Interview transcript with woman from East Midlands Friends of the Earth.

*Question: Why are you here today?

We're trying to take this opportunity with the G8 Environment and Development Ministers meeting just outside Derby to send a direct message to those ministers, particularly about the rhetoric that's being used in terms of climate change, and actually trying to encourage them to take action rather than just talk about the issue - and also to stop pumping our tax-payers money into new oil developments and actually look at real solutions to climate change. Unfortunately, we're in the centre of Derby and they're five miles away - but hopefully our message will get across.

*Question: you've got some barrels here, some barrels that say climate change on them. What was the idea behind that?

We asked people to bring along their messages to the ministers. And to represent the fact that we think Africa needs water not oil. We've asked people to put their messages on bottles of water, and we were hoping maybe at some point later in the day we'd be able to deliver these bottles to the ministers. We're going to have to negotiate that, but that's what we'd really like to do because we can't be seen by them at the moment. At least we'd like the messages to be read by them.

*Question: You said that you were asking for real change from the government... Tony Blair has said that he doesn't understand why anyone would be protesting in relation to the G8, because on the agenda is climate change and Africa and so on. This has been getting a lot of press attention. Is there anything you could say about why you are here today protesting?

We would say that yes, there's a recognition now that climate change is important, in terms of its impact on African development. However, we don't think that the G8 industrialised nations are actually taking the issue seriously enough. They're not taking responsibility for the fact that we, as the richest nations on the planet, are causing the most problems in terms of climate change. We want to see a serious commitment from all governments in the G8 countries to cut their C02 and climate-changing emissions and not just talk about it, but actually take action.