Sheffield Social Forum had its first ‘open meeting’ of 2005 on 17th February. This is a report back by one of the organisers, and some reflections on the social forum movement in 2005. This is just one person’s local point of view. 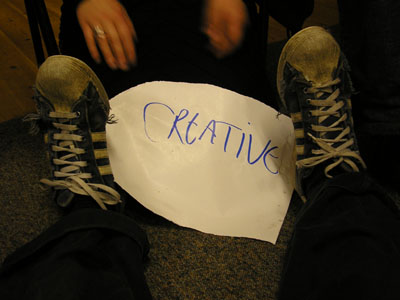 I’ve sent the link for this story to the UK and EU Social Forum list, so it would be good to get some comments from others at the end of this! What's going on where you are?

All SSF meetings are ‘open’ – anyone can come and get involved. But this one was consciously ‘open’ - a kind of mini-forum, where anyone could bring their ideas and talk about what was happening in 2005.

We had 30 people come along and join in, by my reckoning. A whole stack of food was provided, including lots of wonderful soup and enough pasta salad to stuff a dead horse. (If you so wanted to use pasta salad in this way.)

Feedback was really positive. Lots of people met lots of other people they’d never come across before. We went round initially to hear a bit about some campaigns and events. (It was very difficult personally for me to see whether it worked: I’d invested too much in it - emotionally and financially - to be even slightly objective!)

*Make Poverty History (who had a stonking meeting the night before with, I think, 100 people. Gits.)

*Sheffield2Venezuela, who are organising for a delegation to go from Sheffield to the Youth and Student Festival in Venezuela in August. This will be a kind of social-forumy-anti-imperialist event, and as we were told, their definition of ‘youth’ is quite loose!

*Creative Action Network – specifically about the lantern carnival, which is to take place on April 3rd.

*Spital Hill Local Voice – who’ve succeeded in getting the council to agree to a taskforce, with the aim (it is hoped) of getting much more local participation in the ‘master-plans’ to radically overhaul Burngreave’s housing and local economy. (I’m hoping SSF can support a day of workshops on local participation, in conjunction with …)

*A nice man from the Communist Party who wanted us to buy the Morning Star. (You can get it delivered to your door!)

*Peace in the Park – which looks like it may be moving to the end of the summer, but keep your ears open in the next week to find out.

*Plans afoot to have workshops in schools, with the aim of some kind of G8 and global issues youth conference in June, as well as building towards Peace in the Park.

*Sheffield Welfare Action Network, who aim to campaign for those who are going to fall through the gaps in the new system.

A ‘G8 mobilising’ group emerged – here’s what they produced:

And other creative people got together, some of whom may yet (it is rumoured) be beautifying the streets of our great city.

The best part of the meeting for me was after the starting circle – interesting though it was to hear what was going on. We broke for food and drink straight after a go-around of campaigns, because it (as usual) went on for far longer than anticipated. We had said we'd get together for workshops. This didn't happen in a structured way at all. Some groups emerged, and lots of people talked and met new people over a plate of scoff. After a while, some of them coalesced into the G8 group – very seriously huddled, planning feverishly. Everything else was much looser.

I’m too close to it to know if this was a good or a bad thing overall – it seems that a lot of good things, new alliances and friendships may possibly have actually happened, so that’s a success!

One definite good: although I didn’t know it, I went to the meeting with a fixed idea of who I thought should talk to who about what. Almost none of this happened. As someone said to me, the structure didn’t allow it to happen. Which is, I think, great – that’s what social forums are about, and one of the reasons the idea is so powerful. Even the agendas of the organisers cannot be imposed once things get going in open political space.

SSF plans to have mini-forums like this once a quarter. The skeleton of them is nothing more than a room and some food. The flesh of these meetings can vary – this time, G8 planning and meeting new people were the two biggest outcomes. The fact that there weren’t pre-arranged workshops meant this could happen – but we could try other things.

The most useful comment on a feedback form (how grown-up of us, huh!?) was this: “If the forum wants to focus on particular issues, more structure would make things happen faster. However if it wants to ‘merely’ keep people / organisations in touch (a perfectly justified aim, I feel!) then there’s much less need for structure. (I don’t think it can realistically achieve both…!)”

SSF should perhaps plan events that meet both of these needs in the coming year.

On what happens next:

So many things are going on this year, both locally and nationally. It looks like the SSF will be a focus for organising toward the G8, and toward the G7 Justice and Home Affairs ministers coming to Sheffield on June 15th to 17th. (Other localities are organising for this too – we must communicate about this!)

Although, in the notes taken, the phrase 'use the SSF for mobilising' was used – hah! I don't think SSF is going to end up being a G8 Mobilising Collective, like last year's ESF Mobilising Collective. Although I did note that one of the key people in the G8 group was from Worker's Power, we've worked happily with them before.

Now that Peace in the Park is moving from June 11th, there’s a whopping great hole where SSF was going to do a ‘Speakeasy’ debate, food and argument tent / youth tent / NVDA tent. Perhaps this date – the week before the G7 arrive (if we’re being told the truth) – could be an SSF event in Sheffield.

Perhaps it could be the counter-conference the G8 group wanted. But it would also be good to have a conference that connected local goings on to global policies that the G8 support. For example, loss of accountability of your local council; privatisation, leading to Onyx & the incinerator. (What a great name for a band!) Or government policy towards housing which, as Shelter have said, is encouraging property speculation and new build at the same time as an existing 167,000 affordable homes are being demolished. (What will GATS do to national house-building programmes?)

We should probably start planning for this right now.

To end: on the sheet we made to hand out, two SSFers agreed the text. One of them – me – is much more focused on the SSF as a network, and refuses to let go of the Charter of Principles, especially social forums not acting as a body, taking votes etc. The other wants to see campaigns come out of the social forum.

So the two of us agreed on this.

Providing welcoming space for anyone who believes in people not profit. New ideas, alliances, actions and friendships will, we hope, be the result. Whether you believe change can only come about through direct action, or prefer writing letters to MPs, SSF events are a rare chance for talking to people with different ideas, on neutral ground – and with nice food to boot!

Future events will include a day on local democracy and power, a ‘Speakeasy’ tent, youth debating forum and direct action tent at Peace in the Park, and – if this evening goes well – quarterly mini-forums like this.

The Sheffield Social Forum is a supportive place for local campaign work, such as recent activity on welfare, local democracy in Burngreave or the G8.

We’re adding a bulletin of political, social & cultural goings on to our regular announcement list, as well as working to start up a newsletter and add events to our website. (Volunteers please!) We also hope to be welcoming and supportive to newcomers – if you want to do something, but don’t know what, please come along to a meeting and we’ll do our best to help. This will include training sessions in facilitation, direct action and internet use.

To end: for anyone that want to muck in, just e-mail the discussion list, and one of the moderators will pick it up –

Get involved as little or as much as you like: no pressure.

p.s. I keep on asking banks and building societies for forms to set up an account, so’s we can start raising funds properly. (Putting on these meetings is expensive, for a start!) But the forms never arrive… I’m starting to get paranoid.

I really think that, for SSF to grow in 2005, we have to stop spending all of our own money on it!

So – what we may need is a willing and trustworthy volunteer to change their name to Sheffield Social Forum so we can use their bank account.