Join the televised rally at 6pm on the 14th Feb at The National Centre For Popular Music, when Hallam will be re-opening the centre as a students union. The NCPM was built from lottery funding it is considered by some that its true ownership is that of the people.

The National Centre for Popular Music (NCPM) was built over five years ago as a visitor attraction centre for Sheffield using over £18 million of public money. The original project failed for various reasons and for a number of years this iconic building has been abandoned largely empty and unused at the heart of Sheffield's Cultural Industries Quarter — an area in which Sheffield's creative and digital industries are concentrated. 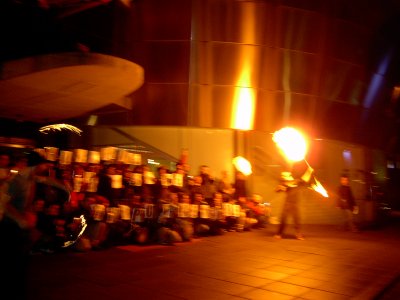 The NCPM has now been taken over by Sheffield Hallam University which has relocated their Students Union to the building. It was rumoured some years ago that Sheffield Hallam had allegedly done a 'land swap' deal with the Regional Development Agency, Yorkshire Forward, and with Sheffield City Council in order to gain control of this public building for less than one tenth of its original cost to the National Lottery Good Causes fund.

The redevelopment of the NCPM as a students union is seen as a severe threat to the redevelopment of the CIQ area and Sheffield City Centre as a whole. This move shows a very poor understanding of Sheffield's indigenous cultural heritage and economy, a lack of recognition for the fundamental role of creative individuals in that cultural economy, and the bankruptcy of the policies imposed in a 'top down' manner by these so-called regeneration agencies.

Sheffield's cultural ecology has been built upon an understanding that creating genuine opportunities for the community to access facilities for cultural production, distribution and consumption will lever the social, economic, cultural and environmental regeneration of the entire city - not just for a small minority sector. This understanding has encouraged a grassroots campaign which started more than two years ago to realise the NCPM as a public centre for cultural and creative activities.