@ Sheffield Independent Film, 5 Brown Street, S1 2BS, just down the road from the Showroom where the Sheffield International Documentary Festival is taking place.

Donations on the door appreciated, see the server appeal for why funds are needed!

Come down and watch some films and hang out - also books and direct action info. 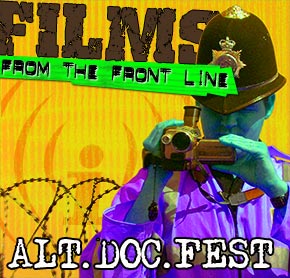 XXI Century
we're screening this epic documentary in seven one-hour episodes over the weekend. This will be the film's premiere in Sheffield and the directors - Gabriele Zamparini and Lorenzo Meccoli - will be here to present their work.
www.TheCatsDream.com
4th World War
an awesome film that brings together the inspiring images and the poetry of worldwide social struggles against neoliberalism. It keenly shows a system that is increasingly dependent on violence and the so-called "war on terror" in order to sustain its world order.
www.bignoisefilms.com
Kilometer Zero
Cancun anti-capitalist action against the 2003 WTO summit in Mexico.
In Whose Interest
a powerful overview examining the effect of US foreign policy on the lives of people in Central America, Southeast Asia, the Middle East - David Kaplowitz, the director, will be in Sheffield to talk about this documentary and we will be showing two more of his film shorts.
www.inwhoseinterest.org
Unprecedented: The 2000 Presidential Election
is the riveting story about how Dubya stole the 2000 US Presidential Election. Given the controversy surrounding the 2004 election this film will be a timely reminder of the fiasco of the last!
Genoa Red Zone
a hard-hitting film presenting the real story of the bloody anti-G8 demonstrations that happened in Genoa in 2001. Eight months in the making with a cast of thousands this hour-long documentary does not shy from the truth.
Outfoxed
Rupert Murdoch's Fox news, as we all suspect, were found to be writing the news, not reporting it! This film reveals the secrets of former Fox employees as they talk about how they were forced to push a "right wing" point of view or risk their jobs.
www.disinfo.com
Chlorine
a bad ass skate documentary featuring all the old punk skateboarders checking out places to skate pools, posing as cleaners, avoiding police, whatever... to get access to pools and reclaim space in their urban landscape for skating. Features Lance Mountain, Duane Peters, Steve Olson, Tony Alva and lots more.
http://freak-designs.com/chlorine/

Plus lots of shorts/direct action films - such as the Fairford film where an anti-war activists coach gets hijacked by the police; DSEi, action against the arms fair in London; back by popular demand - Crowd Bites Wolf - screened in Sheffield at the Lost Film Fest last November, Pie's the Limit - a cornucopia of political pie throwings; The Price of Tea - a film by two Sheffield Indymedia volunteers visiting India.

Also VJ-ing by media activists from Sheffield and the UK.