Naseh Ghafor a resident of Burngreave, Sheffield, was on hunger strike for six weeks from the 8th July to oppose his deportation to Iraq. He had sewn up his lips and was refusing medical attention. He has now removed the stitches from his mouth and stopped his hunger strike.

He believes he will be killed if he is deported to Iraq. His father and brother were killed there and his sister and mother are missing. There is more detailed background information on the NCADC web site. Local and national politicians are offering no hope to Naseh.

Local activists had organised a 24 hour rota to watch over Naseh while he was on hunger strike. Direct action, in the form of road blockades resulted in coverage in the local media and there was a demonstration from Burngreave into the centre of Sheffield on 21st August. 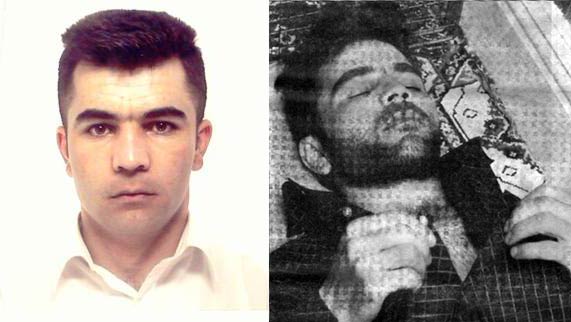 There is more detailed background information on the NCADC web site (extract below).

Naseh's family were wiped out in northern Iraq. During the process of "Arabization", Naseh says his father was killed and his Mother and two sisters disappeared - presumed dead. Terrified, Naseh fled.

Naseh's asylum claim has been refused - He was evicted from his NASS accommodation, his financial support cut, and has no right to work - he was destitute and homeless, and subject to removal.

Frightened by a situation whereby he could be sent back to Iraq anytime, Naseh sewed his lips up and has been on hunger-strike since the 8th July. Doctors have said that Naseh could loose consciousness at any time. Naseh is refusing treatment. He is basically dying. Campaigners have at all times desperately tried every possible means to persuade Naseh to end his hunger-strike, un-stitch his lips and accept medical treatment.

Local and national politicians are offering no hope to Naseh, They refuse to put anything in writing for him. They will not specify how long he can stay. Ibrar [Ibrar Hussain, a local Labour Councillor] would not answer whether he is allowed to work. Ibrar begged him as a Muslim to take out the stitches... Naseh refused. He does not believe these promises. He says he does not trust the politicians. He needs a paper telling him he can stay."

How you can help

The following is taken from Sheffield Committee to Defend Asylum Seekers:

1) Fax/write to the Minister for Immigration Des Browne - requesting that Naseh Ghafor be given official protection. You can use the model letter. Copy/amend/write your own version, feel free to add your own comments.

Or write direct to:

Please notify the campaign of any letters and faxes sent - NasehGhaforMustStay@ncadc.org.uk

2) Download the petition (NasehGhaforPetition.doc) Sign it, and get others to sign too. When the form is complete with signatures, please post it to Sheffield Committee to Defend Asylum Seekers, c/o Sheffield TUC, Sheffield Trades and Labour Club, Talbot Street Entrance, Sheffield S2 2TG

3) Download and distribute the Leaflet (NasehLeaflet.ppt)- to as many people as you can.

Thank You! Your support can make a difference!

Source for this how you can help info:

Audio from the Demo

Some Audio from Todays Demo

The protest/vigil is outside Aspect Court (not Milton House) which is adjacent to the Bus Interchange and just pass the Old Queen's Head pub).

information for supporters of Naseh:

Today's protest/ vigil started at 11am outside Milton House on Charter Row, the place where work permits are dealt with.

There are three offices for the immigration dept in Sheffield city centre: Milton House, Aspect court and the Moorfoot building - which is probably the Hq for Sheffield.

Today's protest will continue at Charter Row until later...

Meet 5pm Tuesday 16th August on Ellesmere Green (top of Spital Hill) for a protest/vigil for Naseh Ghafor's right to live, stay and work in this country.
Same time each day.

What bus route is Ellesmere Green on? 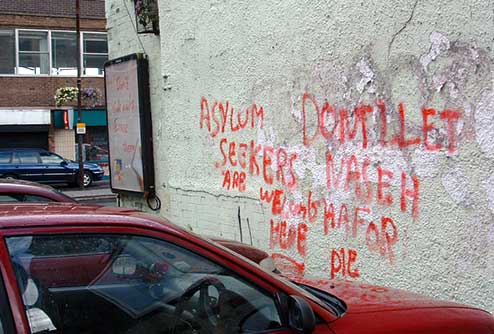 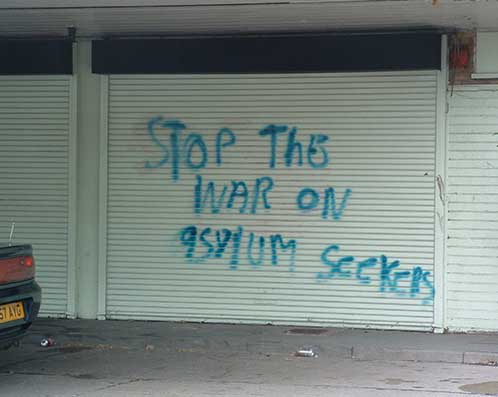 Stop the war on asylum seekers

There is a lot of anger over Blunkett's cold blooded attitude to Naseh Ghafor who is living in Blunkett's constituency. Blunkett's comment, that this hunger strike was just a publicity stunt, reveals a very deep level of denial. Someone that out of touch with reality is in no way fit to be an MP let alone the Home Secretary.

Here's some graffitti spotted on Spittal Hill, not far from where Naseh lies starving to death.

i become involved on the 12.8.04.. i simply could not
walk away and let this man die.. this would have
happened if myself, deacon dave & jean wood had one,
not been involved and two, been continuously talking
with Naseh Ghafor..

from the moment i got involved i realised he was a
politcal pawn.. to me here was a man prepared to die
rather than face going back to iraq.. how often, how
meny times are people like Naseh Ghafor going to be
let down and used as political pawns in the power
games of self interested people? be them in government
or selling papers to each other on the demo held on
saturday for Naseh Ghafor..

now i need to re-focus on my homelessness and other
hassles.. the fight for Naseh Ghafor goes on.. this is
not about class.. one simple slogan on the demo should
have been: no borders, no states, no class divide.. it
has become very apparent to me that class is is used
as a means of subjugation.. like wise politics.. we
need to see further than what we are told.. we need to
see people as human.. i saw Naseh Ghafor watched the
fear in a young man as he was let down on all sides..
i have no doubt deacon dave, jean wood and myself
saved this man's life.. what happens when we are not
there? the very act of being polical is seeing people
as human this is my own "jihad".. i simply acted upon
the very real need of another broken human needing
love, time and support plus i was happy to give and
aford the time for Naseh Ghafor, a brave and very
courageous person.. who from the age of 17 to now has
suffered because of human self interest be that in the
form of blunkett or the paper sellers or self
righteous religious people/warring factions.. for me
it was a act of humanity not a career devolopment
opportunity and so forth..

i hope we have realised some basic truths of ourselves
and start to act upon them.. as a freedom
fighter/communist with leanings towards being pagan, i
know i have learned some real hard truths of myself
during the fight to save Naseh Ghafor i also hope we
all have learned.. however i doubt we will have.. that
we will go back to our own self interest and Naseh
Ghafor will just form part of what you did for summer
conversations.. how sad a reflection upon what selfish
self centred people we have become as human beings..
it saddens me to my very being there are thousands of
people like Naseh Ghafor either seeking refuge here as
well as people direct from the uk.. well that's my
thoughts now his hunger strike is over.. see you at
the next one i have no doubt..

But there's been a regime change since then boy...

...but I guess Iraq today is hardy a relaxing and easy prospect! Good luck to the geezer.
(If your a communist I couldn't give a fuck about your predicament...ther's been enough of that bullshit. Are you aware of what that perverted pyscopathy did and is doing to Tribal Tibet's precious jewel?).