A look at the two stikes underway today and the coverage by the Sheffield Star's newspaper. 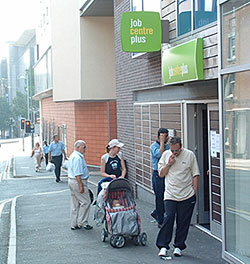 Unemployed turned away from the Jobcentre today 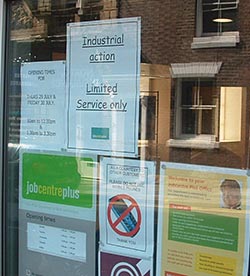 I had to walk to Sheffield to sign on today because of the bus strike and when I got there I found I'd wasted my time. The dole workers were on strike too!

At the entrance to the Cavendish Court Job Centre was a woman turning people away, except for a few special cases. I asked her what the strike was about and she just said pay. I suspect there is more to it than that. About a month ago the workers there were taking action over new rules so it may well be the same thing.

Then Sheffield Star's web site has two articles on how the bus strike is crippling businesses in Sheffield.

In the first [1] it quotes Jonathan Stone, Chief Executive of Sheffield Chamber of Trade. He says "If the strike goes on for another couple of weeks, then we will see some small businesses disappear. The problem of being a smaller business is that a reduction in trade can slash into your profit and have a huge impact. Losing 50 per cent in trade is devastating."

Well I don't know how true all this is but I imagine Stone is likely to be on the side of First management rather than its drivers so he may well be exaggerating the effects of the strike here. The town centre appeared about as busy as any other weekday to me. There wasn't a noticeable lack of people anyway. I also think the problem of small businesses has much more to do with exorbitant rents from greedy property owners. If the rents were more reasonable there businesses would be on such a knife edge.

The Star's second article focused purely on economic impact of the strike. In fact every Star article I've read has been about economics of the situation - a clear indication of the Star's neo-liberal agenda. As if money is the most important thing! It was told the story of various small traders on their way to bankruptsy because of the strike.

The first paragraph however was about Zionist supporting company Marks and Spencers who lost £40,000 in the first four days of the strike. This is down from an earlier report which claimed they'd lost £400,000.

Interestingly the same article used another quote which claimed some stall holders in Castle Market were, "already are in debt by about £40,000." About the same as M&S then? Hmmm.

Anyway personally I support the bus drivers all the way. The figures quoted elsewhere say that First buses made a £160 million in profits last year while the strike will cost £368,000 pounds to resolve. That means it will cost them less than a quarter of 1 percent of last years profits. So why won't First get on with it and pay up? And why didn't the bus drivers get their annual wage rise on April 1st anyway?

Anyway the good news is that for all you Doley's out there if you've got to sign on tomorrow you don't have to bother.