Sainsbury's chilled food distribution centres were blockaded across the country on Thursday in protest against GM feed being fed to dairy cows. Sainsbury’s five biggest UK distribution centres were shut down as evironmentalists and consumers simultaneously blockaded the supermarket chain's chilled-goods depots in London, Liverpool, Birmingham, Bristol and Sheffield. They were chained together through steel tubes, or sat up scaffold tripods, blocking the depot gates. The co-ordinated action was intended to halt distribution of Sainsbury's dairy products that come from cows fed GM animal feed.

The protest follows Sainsbury’s failure to provide non-GM fed milk as standard, despite rivals like Marks and Spencer and the Co-op doing so. The action was taken in solidarity with farmers, demanding they get a fair deal of 2p on the pound for non-GM milk. The coalition of groups campaigning on this issue includes Farmers for Action, the Small and Family Farmers Alliance, The Small Farms Association, the Wholesome Food Association, the Institute of Science in Society, Genetic Food Alert and the Genetic Engineering Network (see GM animal feed campaign PDF). Also see National press release

In a related action, farmers in Barnstaple blockaded a Sainsbury's store, while consumers and campaigners labelled GM milk inside the store: report and press release here. 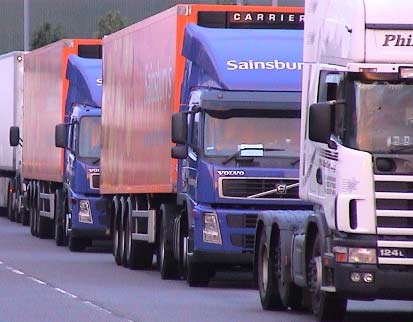