In the battle to save Sherwood Forest's finest living beech tree recent developments mean a successful outcome is now more possible than ever. 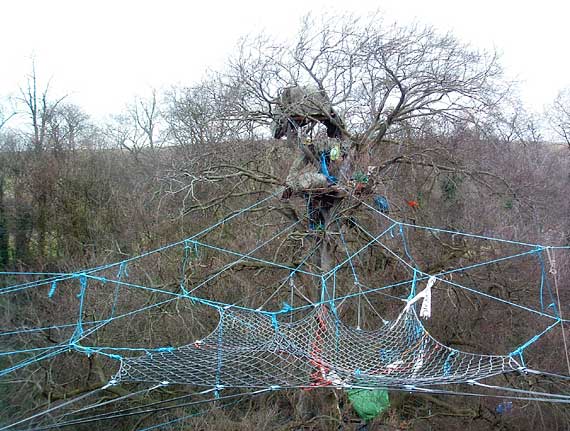 A network of nets and walkways from the ancient beech tree

Mansfield District Council have hired an independent roads and highways specialist to see if there is an alternative solut ion the moving and widening of the road junction that will destroy the 300 year old beech tree. The tree has been officially recorded as Nottinghamshire's finest living beech tree and a protest camp has been set up since September to defend the tree from developers.

The massive road changes to the road junction at Sherwood Rise and Debdale Lane on the edge village of Mansfield Woodhouse mean the existing road will be moved and widened. This new junction was stipulated by the council as a planning condition th at housing developers Bellway had to agree to gain permission for their new houses about a quarter of mile down the road.

At council elections a couple of years ago a number of seats on Mansfield District Council (MDC) changed hands from the en trenched Labour Party candidates who have been in power for many years to Independents. The Indpendents now appear to want to save the tree. The new head of MDC Planning Commitee is Independent councillor Brian Clarke who manages his own woodlands an d says he doesn't want to see the ancient beech tree go. The usual protocol is for the planning committee councillors to almo st always follow like sheep the advice the council's own planners. The planners are unelected specialists and because their a dvice is rarely if ever turned down they are in a powerful position.

But now MDC's planning committee have chosen to ignore their own planners and have instead hired an independent civil engi neer specialising in roads and highways. This will cost the council some £20,000 to £30,000 pounds according to C larke. If an alternative traffic solution can be found both Bellway and MDC have agreed to go along with it. The one party th at have not agreed yet is Nottinghamshire County Council.

This week Councillor Clarke organised three 1 hour meetings with the new road specialist. The first was with protestors an d local residents opposed to the current road widening plans. The second was with Bellway and the third was with Notts County Council (though not sure if this last meeting actually happened).

Despite only 2 days notice the residents and protestors managed a pretty impressive presentation detailing a number of problems with the current proposal (aside from the felling of the trees) and a number of possible alternative solutions.

The road specialist will reach his decision on April 30th and said that Bellway have said they will not evict the site before then.

Bellway have also now employed their own road specialist who was also looking around the site this week. The reasons for this are unclear though its hoped that they're keen to find an alternative solution too.

So the camp is a little more relaxed now though still standing by. One rumour this week was that once the bailiffs had finished at Blackwood they would move on to the Sherwood site and then Nine Ladies. Although most people on the site think this is unlikely no one is taking any chances. But now, instead of building up ever stronger defences, people's energy has been going into other projects. The site is having a spring clean and the communal dwelling is being rebuilt after storm damage from last weekend. Other plans include a new website and an idea for a spring fete has also been mooted.

Visitors are always welcome. Locals visit everyday providing wonderful support that we're very grateful for. If you come from further away you can always stay over - we'll always find you some decent sleeping space. And we also have safety ropes set up for anyone who want learn to climb trees too.