An office occupation of a Marshalls PLC building took place on Thursday 25th March in Elland, West Yorkshire, as a group of up to 25 activists from Yorkshire, Manchester, Derbyshire and Lancashire decided to ram home the message that corporate exploitation and destruction of our woodlands will not go unchallenged (see photos). The following day people also blockaded and occupied a Marshalls depot in Mansfield Woodhouse.

Marshalls is a huge multinational company specialising in landscape and construction materials, especially stone. Marshalls is a particularly 'hot' target at the moment as its subsidiary Stancliffe Stone is behind the plan to quarry the hillside below Stanton Moor, right next to the Nine Ladies Stone Circle. This insidious plan to quarry a place of rare natural beauty in the middle of the Peak District National Park has been up to now unsuccessful due to the fight put up by the people at the Nine Ladies protest camp. Marshalls however has recently stepped up the pressure to evict the camp and go ahead with the quarrying despite objections from a whole range of actors. Read Latest Camp Update including photos (27/03/04) 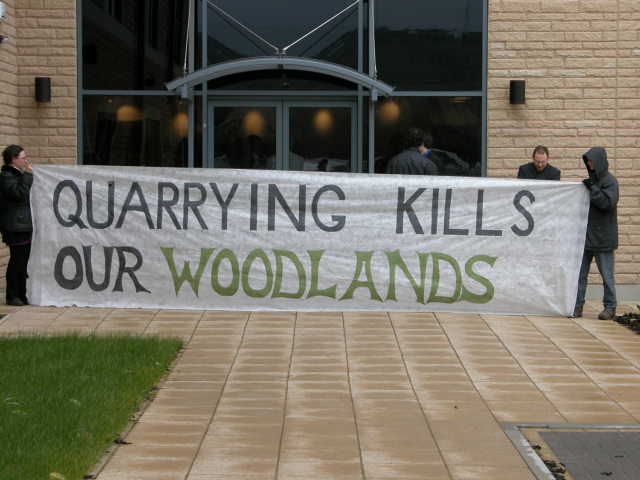