A nation of sickos

Why are we so sick? 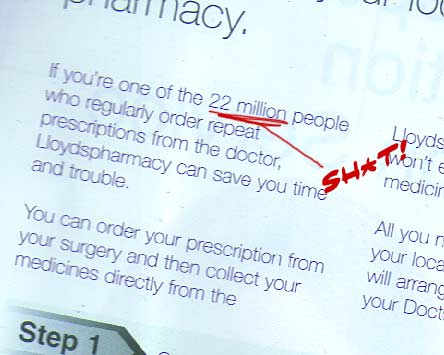 The other day I came across a startling fact in a bit of junk mail that's probably gone out to every house in Sheffield. The pamphlet was advertising some new service by a chemists chain store for people who get repeated prescriptions. It claimed that 22 million people in this country now get repeat prescriptions. Twenty two million people!!! Wow, in a country of 60 million that's over a third of the population. That's a lot of sick people.

But that's only counting those on repeat prescriptions. There are, of course, many other maladies and afflictions where people are not any kind of drugs at all. These include short term stuff like colds, flu, infections and digestive problems to things like alziemers disease, osteoporosis and many others where there are no suitable drugs or, for some, the side effects of the drug are worse than the illness. Add to that people recovering from things like broken bones or wounds from accidents etc and that's probably getting on for, or even beyond, half the population of this country.

About a year ago I saw a documentary covering the lives of some people who lived a primitive existence out in the wilds of some part of the former USSR - Siberia I think it was. They lived their lives in temporary structures, moving often in the harsh cold climate. Their food came from hunting whatever animals they could find. One of the questions the documentary team asked them was, "What do you do when you get ill?"

Their answer was simple. "We don't get ill," they replied. This confirmed something a friend had been telling me some time earlier. There are or have been some societies out there, so called primitive societies, where the people live from birth to death and never get ill at all. The whole idea of illness is alien to them.

So you might wonder how it is that our society, with its obsessions about hygiene and health and with supposedly the most advanced healthcare ever, has become such an incredibly sick society. And if anything things seem to be getting worse with increases in mental illnesses like depression and physical problems like obseity.

I suppose there's a whole range of possible answers. One claim is that we are living longer now. According to government statistics (up to 1998) we now live 5 years longer than in 1971. Men live to an average of 75 and women live to almost 80. So maybe some of our lives are extended through the use of drugs. But that certainly doesn't account for half the population. And some of the so called primitive societies lived just as long as we do. Old age should not necessarily mean sickness.

Another factor could be that the drug companies are inventing or at least promoting new illnesses to sell us their drugs. Examples could be "problems" like attention deficit disorder and hyperactivity in children. Some children are a bit more energtic than 'normal' or are not particularly interested in their boring lessons. So instead of allowing them the time and space to let off steam they're prescribed the controversial killer drug Ritalin (methylphenidate). What makes things worse is that it could be that some smart kids maybe feigning these 'illnesses' in order to get hold of this cocaine-like substance. In the US four percent of kids are now on Ritalin. The pharmaceutical industry is the most profitable in the world.

But whatever the case with Ritalin mental health certainly accounts for a lot of health problems. According to the charity MIND 3 out 10 people experience mental health problems every year. And a big, national survey in 1999 found that 10 percent of children (aged 5-15 years) suffered from "mental disorders".

Back in the physical world there are range of possible reasons for our poor health. There's an ever increasing range of environmental pollution. Every one of us now has at least 200 different synthetic compounds inside us. Traffic in cities creates asthma and respiratory problems as well as more serious problems like cancer. Our lifestyles, at least for many people, are predominently now sedentary. Lack of exercise can cause all sort of problems from blood pressure and heart problems to back and posture problems.

Our diets are well below par. Fresh food travels miles to reach us, is mostly contaminated with chemical spays when grown, and frequently does not contain the nutrients it is supposed to. But a lot of what we eat isn't fresh food anyway as we tend to rely on prepackaged processed food instead. This makes sound economic sense especially for those with not much money. In terms of calorific intake a kingsize Mars bar is probably the best value you can get. But in terms of nutritional value is virtually useless.

So how did we get to this state of poor health? There's clearly a variety of causes. But there is one cause that underpins them all. What the difference between our society and those that never get ill? Capitalist industrialisation. Whether its from the pollution of too many cars sold to us everywhere we look or mental disorders originating from frustrating lives, poverty and consequent poor parenting the root cause is the same.

So it looks like we're heading for a time when over half the population is poorly. Perhaps we're there already. When that happens it means that ill-health will be normal and those with good health will be a minority.