Deacon Dave Havard was in court today for his part in protesting illegal and immoral arms trading at the DSEi Arms Fair in September. He was charged with Obstruction of the Highway but the case was dismissed as the arresting police officers failed to appear in court. 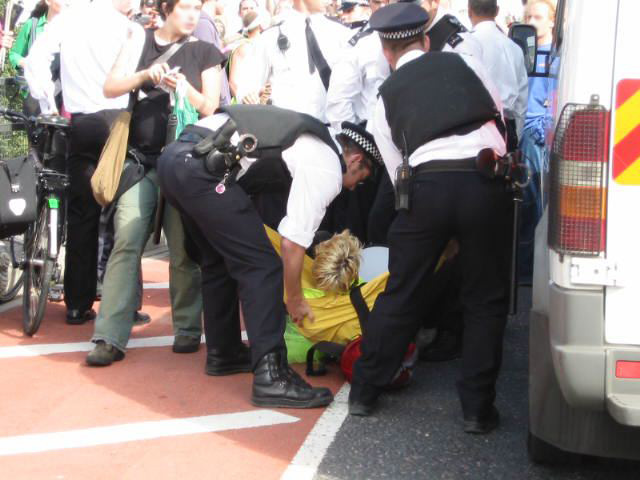 Deacon Dave, 47, father of 3, has been a clergyperson in the Church of England for 19 years, working on peace and justice issues. He currently attends St. Mary’s Church, Bramall Lane in Sheffield. He was in London playing with the Sheffield Samba Band when arrested.

156 peace activists were arrested at DSEi this year. 3,000 police were brought in to prevent peaceful protest at a cost of over £2 million. Leaked documents revealed that the Metropolitan Police were aware that at least 300 exhibitors did not have valid licenses to trade arms in this country and so were committing a criminal offence. The Home office advised the police not to pursue prosecutions as this would embarrass the government who organised and paid for DSEi.

At DSEi in 1999 an independent journalist revealed that land mines were being advertised and offered for sale, despite being a banned and illegal weapon in this country.

Saddam Hussein received most of his weapons from the US and Britain, many of those arms sales being made at DSEi. Equally brutal regimes are still honoured guests at DSEi 2003. Britain is one of the leading weapons exporters in the world selling weapons and torture equipment to Saudi Arabia, Philippines, Turkey and Israel, countries with appalling human rights records and even to countries the US deems too brutal to support.

Deacon Dave said today, “ It is a relief to have charges dropped but it is outrageous that they were brought in the first place. Why should British taxpayers be funding a weapon’s fair to sell weapons which the vast majority of citizens believe are immoral and should be banned altogether ? Why should our government be supporting brutal regimes and sowing the seeds for future conflicts and terrorism ? Why are the Metropolitan police being employed to defend criminals and murderers and harass peaceful protestors ?

For pictures and news of Sheffield Samba Band: www.sheffieldsamba.org.uk