Report and pics from the Sambatistas Roaming Street Party. 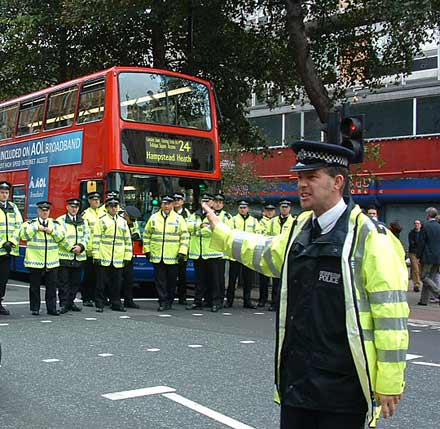 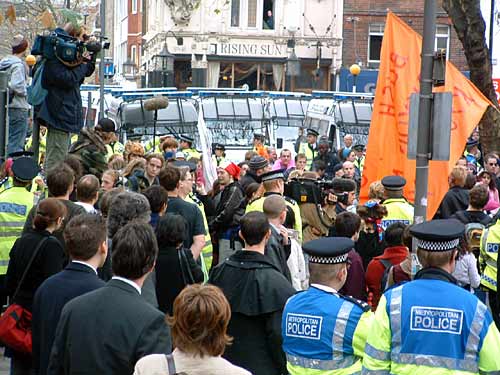 The band is surrounded 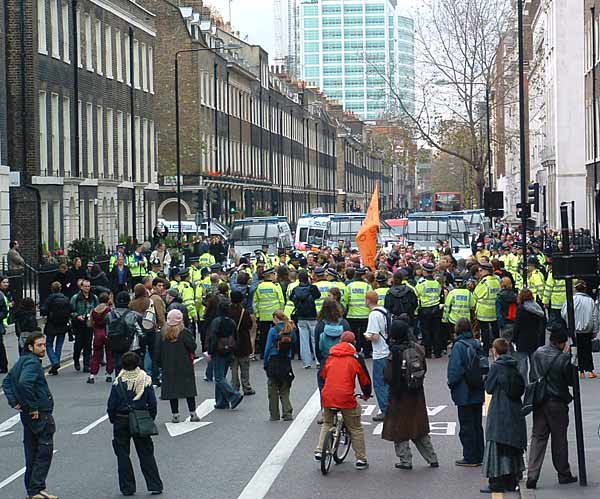 The party on Gower Street 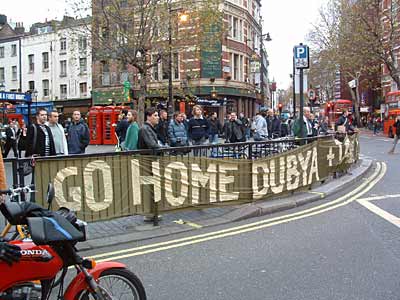 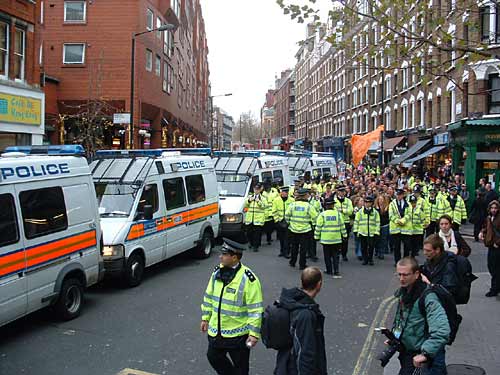 The Sambatista's roaming street party event was nothing if not interesting. It met at the University of London and there were surprisingly few people there - probably a couple of hundred. Happening at the same time there was the Alternative State Procession which split the numbers plus the meeting point for our event was announced until the last minute.

In the morning I met a woman who was going to the Alternative State Procession. She knew about the street party but didn't know where it met so had chosen the State Procession instead. Not everyone checks Indymedia every day - something worth bearing in mind for organisers of these events.

Anyway there was a lot of waiting around outside the University. First I heard that the Police wouldn't let Party take place. Then I heard they would let us go for only 60 minutes. But whatever, the police apparently had half the Metropolitan Police to deal with protesters. That's 7000 officers. So with only a couple of hundred of us we were going to be pretty tightly controlled.

Well not exactly as it happens. The Samba band eventually started up and we took to the streets. This seemed to take the police by complete surprise for some reason. I think we went the opposite way to what they expected. Anyway there were some half hearted attempts to stop us but these failed and we meandered off down the streets.

We soon came to Tottenham Court Road which is a major 3 lane, one way street going North from the centre point of London and was full of traffic. I don't know where the cops were at this point but they certainly weren't in front of us so off we went into the totally congested one way street. We were heading south, that is against the flow of the traffic. Anyway by this point it was mayhem - the band played on as we weaved our way through the now stationary oncoming traffic.

After about 5 or 10 minutes of this sirens started ahead of us as cop vans tried to reach us through the snarled up traffic. Nothing was moving though and as we were heading in their direction they all got out and blocked the road to force us down a side street.

After that they surrounded the band and a lot of other people and held them for 20 minutes until their reinforcements arrived and had worked out what to do. After this the policing was fairly tight you can see from the photos. One passer by on Shaftsbury Avenue was astonished how small the demo was after seeing the massive entourage of cops and vans.

We finally made it to Trafalgar Square to catch the end of the women's action. A giant Peace symbol had been painted on the ground one of the pools of water had been dyed red.

All in all it was an entertaining and somewhat bizarre spectacle, if not the most empowering event I've been on. The band played some great tunes which stayed with me all day.