The school students rally appeared to be crushed by scare tactics through the media. 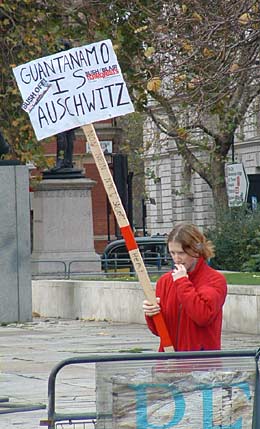 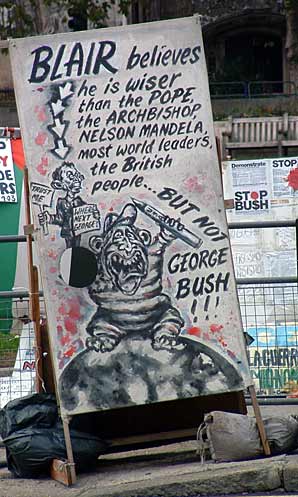 In theory radio chat shows should be pretty open channels of media debate. However after listening to a few hours of Londons main talk radio channel this morning it soon became clear how regulated and manipulative even these can be.

Sure enough the debate was about the Dubya visit but instead of being open and free the presenter confined the debate to one very narrow area of discussion: should school students be allowed to protest. Much was made of the fact that it is illegal for kids not to go to school. I've never heard truenting called 'illegal' before - it's usually considered something simply a bit naughty and if a student truents persistently over a period then the school may take some kind of action. First parents will be contacted and only if all else fails a student may eventually be expelled. Truency is not usually considered a police matter. But this programme claimed there were going to be 5 special police looking out just for kids taking time off school to protest.

It also claimed that head teachers were going to take harsh measures, such as expelling pupils, if they did take time off. Now assuming this claim was true it implies that the head teachers must have all been given orders from above. Otherwise this would and should be different for all schools since the head teachers would naturally all have different positions on this.

Interesting because this was nothing but a blatent attempt by the state to block dissent in this country. The state is really worried by young people it seems.

The program said nothing at all about the fact George Bush is constantly breaking international laws including two illegal invasions, use of weapons of mass destruction and the fact that according to Dubya American citizens are exempt from International law or being tried at International Criminal Court in the Hague. When one caller tried to move the debate saying that Nazi soldiers were only obeying the law when they gassed the jews the presenter quickly brushed this aside and moved on to someone else.

People who consume mainstream media but say it doesn't affect them because they see through the lies are missing the point. By confining the debate to small areas it focuses the mind on just those and shuts off other areas of thought.

Anyway sadly this psychological bullying of the students seemed to work. I arrived at Parliament Square at about 11.45. The school student rally was supposed to have started at 11.00 but I saw only a few people - not sure if any of them were students. There were some great banners and stuff set up facing the Houses of Parliament.