An analysis of yesterday's Sheffield demonstration against George Bush.

Demo apathy - what is it, what causes it.

Why we keep on repeating the same tactics that never achieve the results we want? 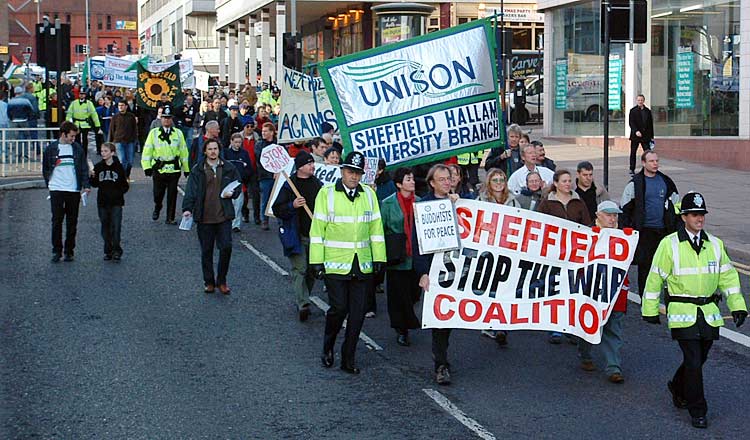 The unity of Police and protesters symbolises a secret set of shared goals. 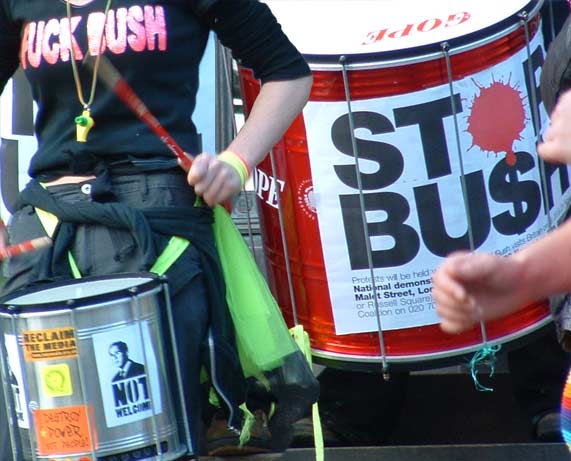 Sheffield's anti-Bush demo took place yesterday, Saturday 15th November. This demo was smaller than previous demos with probably less than a thousand people. Previous anti-war demos in Sheffield have attracted up to 2,500. There are several explanations for the drop in numbers.

Firstly the publicity, to me at least, seemed less prominent. This probably has something to with the fact that the core of the local Stop the War Coalition has less people now and so inevitably less people to do the hard work of publicity. It's credit to those who put the work in to make this happen at all. And the local coalition are also organising coaches to take people to London on Thursday, another unenviable job that takes a lot of hard work and energy.

Secondly there is not the urgency or the immediacy there was in the build up to war. We're not about save thousands of lives, and we're not going to stop George Bush coming to Britain. One person from the STWC was collecting signatures to petition Blair to revoke the invitation. I signed it knowing full well I was only doing so to make the person collecting signatures feel better rather than have any impact on Bush's visit next week.

Thirdly there were some Sheffield folk who are still not back from the European Social Forum in Paris. Although the number there was probably no more than around 30 (if that) perhaps some of these would have helped with building this event.

Finally there is something which could be described as demo apathy. I know some people, very political and 100% anti-Bush who knew about the demo yet didn't even bother to go. One person stayed in bed. Another friend decided that cleaning up the house was a more important priority and saw yesterday's demonstration as pointless.

Demo apathy is similar to voter apathy. Essentially we've all be through the routine several times before and we're starting to realise that these public spectacles aren't going to make any difference at all. Ken Livingstone once said, "If voting changed anything they'd abolish it". Well the same could be said about demonstrations too.

In fact these state sanctioned spectacles are not only no problem for those in power, those in power use them as propaganda to justify their position. Earlier in the week close Bush official, Condoleeza Rice, was asked about the anticipated anti-Bush protests. Her reply: "...the President, as he said in Australia, he understands free speech, welcomes free speech. People can protest and say what they want. It's a good thing to remember that the kinds of things that we're fighting for worldwide are so that people can have free speech and protest." [1]

So it's no surprise that the Police, who are part of the state that we're supposed to be against, are happy to work alongside the Stop the War Coalition.

Demonstrations serve several purposes for those on both sides. They allow people to express their anger at the government and the system in a way that is totally acceptable to those in power. Anger and frustration have to be vented and expressed somewhere so what better way than through a nice orderly walk around the town, perhaps with some chanting and offensive banners thrown in if you're really angry.

Secondly they allow those who take part to feel better about themselves. They vehemently oppose what is going on and now they've done something about it. One can go home and feel that, "Well, at least I tried".

Thirdly demonstrations take relatively little effort and zero risk. This is true for both demonstrators and the Police. If you go to London the coaches are all laid on and all one has to do is turn up. It's a fast food form of struggle that can be carried out with the minimum of effort and commitment. The event is consumed and the participant can quickly return to normal life the next day. This again serves the interests of both sides.

Finally demonstrations are useful to those in power to prove what a nice rosy democracy we all live in. The fact that those demonstrating are always completely ignored is conveniently forgotten by both sides.

The most significant victory against those in power in recent history has to be the defeat of the Poll Tax which brought down the Iron Lady, Maggie Thatcher, too. Although the large demos played a part in this what won the campaign was direct action on a massive scale. A significant part of the population were prepared to break the law and refused to pay the tax.

However over past decade there have been important changes in the UK and global political scene that the Stop the War coalition do not seem to be taking account of. Politics in this country has become increasingly polarised. Those in power have become more right wing and a wide spectrum of repressive laws have been brought in. These include things like the CJA, RIP, the so called anti-terrorism laws (that despite the name have mostly be used against ordinary people).

On the other side activism has become increasingly radical. More and more people have been prepared to take direct action, not just in this country but across the globe. Mass events like the Global Street Party Against the G8 in 1998 are augmented by thousands of smaller actions like the continuous trashings of GM crops.

So why doesn't the Stop the War Coalition take this growing radicalism and use it against the crimes committed by our government? It's because the STWC is mostly made up of liberals even though many describe themselves as socialist or revolutionary. Whilst many socialists sincerely embrace the ideas of revolutionary politics when it comes to action most of what they do invariably fits in with a liberal political agenda: demonstrations, petitions, leaflets, vigils and public meetings.

So why do we continue with a range of actions that even George Bush can support? Well a typical answer from those in the STWC will usually explain their tactics in terms of numbers. They want to get as many people to an event as possible regardless of its efficacy. And so working on the premise that most people are liberal it follows that you have to put on a liberal style event, regardless of you're own political beliefs. They won't phrase it like that but that is pretty much what it comes down to.

So one might ask why do they never learn? The historic demo on February 15th was an amazing thing to be a part of but it was also the ultimate proof that demonstrations alone are not going to change government policies. The Bolivian Government fell a few weeks ago not because of demonstrations but because of mass civil unrest. Surely its not that hard to work out?

Recently a friend gave a good explanation. He said people are afraid of confrontation. In fact most will avoid it at all costs. So whilst many people's beliefs and political theory may be genuinely radical its those subconscious fears of confrontation that are often the guiding force of their actions. And until that is recognised it means they will carry on, always able to find arguments that support and lead to a liberal way of doing things.