The Sedgefield Welcoming Committee invites you to come to Sedgefield on Friday 21st to meet and greet President George W Bush and Tony Blair. 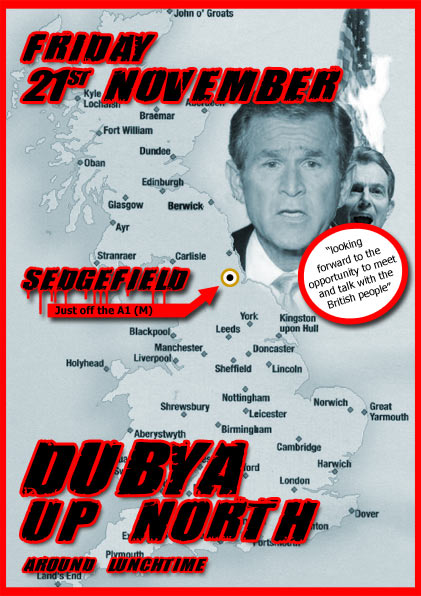 After what will no doubt be chaotic visit to London where large numbers of people will protest the deaths of thousands of people (who aren't even white) while forgeting all about the recently liberated Iraqi oil fields what Mr Bush would really appreciate is a nice quiet visit with some friendly support from the British people.

A bit of flag waving would be great for cameras and press and prove to Americans back home that the British people really do support the US plans to dominate the world.

Sedgefield, home of Tony Blair, is a lovely place and is quick and easy to get to. It's just off the A1 (M) so why not take the trouble to make Friday 21st November a historic day to remember.

The President is looking forward to the opportunity to meet and talk with the British people. In particular, he will extend his appreciation and gratitude to British soldiers and their families for the sacrifice and commitment in the war on terror.

On Tuesday, November 18th, the President and the First Lady will depart Washington for the United Kingdom. Upon arrival that evening, they will participate in a private welcome at Buckingham Palace.

Following the ceremonial welcome, the President will meet briefly and separately with Conservative Party and Liberal Democrat leaders. That afternoon he will deliver a speech at the Banqueting House, Whitehall Palace, on the transatlantic alliance and his forward strategy. After the speech, he will meet with British families who lost loved ones on September 11th, 2001.

On Wednesday evening, the President and First Lady will attend the state banquet in their honor at Buckingham Palace. And we all look forward to seeing the President in tails. (Laughter.)

QUESTION: Does that include the President? (Laughter.)

On Thursday, November 20th, the President will visit the Tomb of the Unknown Warrior, tour Westminster Abbey, and meet with British soldiers who fought in Afghanistan and Iraq, and with their families. The President will then meet with Prime Minister Blair at Number 10 Downing Street. The two leaders will hold a joint press availability, attend a working lunch, and host a roundtable on HIV/AIDS. That evening, the President and First Lady will host a reciprocal dinner for Her Majesty at the Ambassador's residence, Winfield House.

Q: On the London visit, as you know, there are substantial protests that are planned while the President is there. And there have been reports that British security services are concerned that members of al Qaeda may try to infiltrate the demonstrations, posing as protesters. Do you share those concerns, and do you have any intelligence to suggest that al Qaeda members are, in fact, trying to do that?

DR. RICE: We have enormous confidence in British intelligence and British security services and, indeed, the British police. And so the -- obviously, we're working with them to make certain that this visit is secure and safe. But we -- the President, as he said in Australia, he understands free speech, welcomes free speech. People can protest and say what they want. It's a good thing to remember that the kinds of things that we're fighting for worldwide are so that people can have free speech and protest. It wasn't possible in Iraq or in Afghanistan just a few years ago to have the same liberties and freedoms that the people in Britain will exercise when they protest. And as long as we all keep that in mind, I think it's -- we have no problem with people protesting. And I don't think that anyone has concerns about the Brits' ability to handle all this.