In recent days three more actions have been carried out against firms due to exhibit at the DSEi Arms Fair in London 9-12th September. Further protests against DSEi in London and NATO's Military Committee in Cambridge are expected over the next few days.

Meanwhile on Tuesday 2nd around twenty people took action against Fluent Ltd, a computer modelling software company in Sheffield. Several campaigners barricaded themselves inside the revolving doors while more people climbed up onto the canopy above the main entrance and hung a banner reading "Fluent Deal in Death" (see report, pics). The action followed anti-arms street theatre in the city centre. 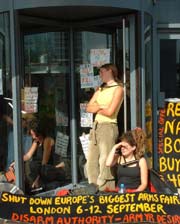