Around twenty people took action against Fluent Ltd, a computer modelling software company on an industrial estate next to Sheffield airport today. 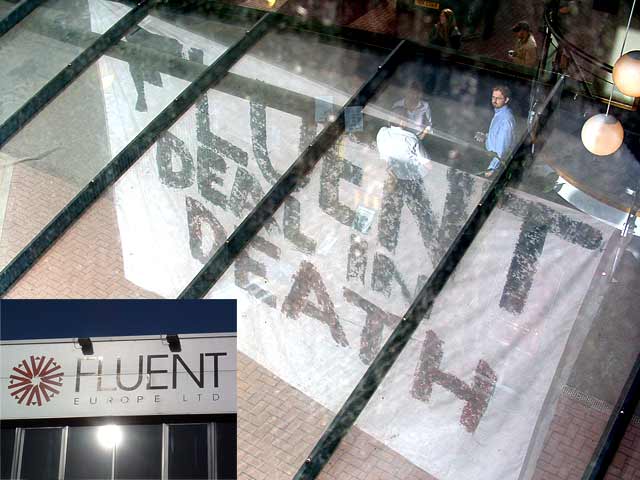 The company makes software for a range of industries from food and environmental to oil and nuclear. However the protest was specifically about Fluent's use of software for airflow modelling of missiles. Their web site claims they are "the largest commercial CFD software supplier in the world" and have "a broad client base in the Aerospace and Defense Industries".

They also intend to exhibit at the highly controversial DSEi arms fair in London next week.

Four people barricaded themselves inside the revolving doors using door stops inside to stop the doors rotating. Two more used bicycle D-locks to lock themselves to the doors by their necks to the same door. Anyone entering the building was forced to do so via the backdoor so whilst this didn't stop work at the building it did make a powerful symbolic protest.

Three more people climbed up onto the canopy above the main entrance and hung a banner: "Fluent Deal in Death". Other folk handed out leaflets about Fluent's involvement in the arms industry. Several police cars arrived fairly shortly after the protest started at 9 am though the police were fairly chilled saying the protest could continue if work was not stopped.

The protest ended around 11.15 but not before local press and a TV cameraman had visited the scene.

Fluent later claimed that someone had switched off the air conditioning which could have damaged computer systems and that someone else had broken a glass panel on the building.

All in all a successful action and nice way to spend a few hours in the sun.