Sheffield Indymedia is screening Revolution OS at The Showroom Cinema on Saturday 26 July at 4.00pm. It's a film about the anti-microsoft rebellion, the Free software movement and GNU/Linux, the Free alternative to Windows.

Read on for some more information about the Free software movement and why it matters and for some news from the Sheffield Linux community. 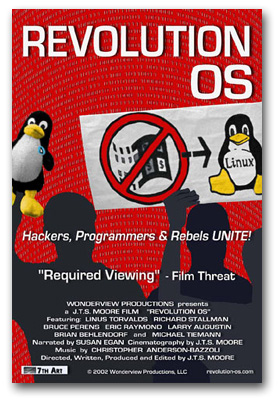 If you are using Windows to read this you might not be aware that there is a Free, alternative operating system that you could be running, GNU/Linux.

Sheffield Indymedia has organised a showing of Revolution OS at the Showroom on Saturday 26 July at 4.00pm — this film promises to be a good introduction to GNU/Linux and the Free software movement, more info about the film is on the Revolution OS web site.

Free as in freedom

Free in this context is free as in free speech not free as in free beer — Free software is generally zero cost but you can also pay for it if you want an install guidebook and commercial support, or the means it gets to you.

If you are using Windows for 'free' (ie without paying Microsoft for it) you might think that you are doing something cool and perhaps you think this is small anti-capitalist action in itself. It isn't. You are not hurting Microsoft, you are helping to support them — the time you spend learning how to install and support Windows and then the time you spend helping other people is all ensuring Windows retains it's dominance. See article: Piracy ain't all it's cracked up to be: Sometimes it benefits the 'victim' (pdf)

The freedom is the freedom to share and build a community rather than be divided and dominated as with proprietary software.

For more on the freedom aspect of Free software see the Free Software Foundation web site and the philosophy stuff.

Free software isn't only important because it has the potential to bring down one of the richest corporations in the world, Microsoft. It has far greater potential than this. Some people have argued that it represents a germ form of a post-capitalist economic system, a system based on production for need, a GPL Society, for more on this see this interview with Stefan Mertan and this text on marxism and Free software on the Project Oekonux web site.

If you are an activist who would like to escape from using Windows and don't know where to start then an event that has been designed just for this is the AktiviX - weekend Linux workshop for campaigners 20th - 21st September 2003 in Lancaster. Some people from Sheffield Indymedia are planning to attend — why don't you join us?